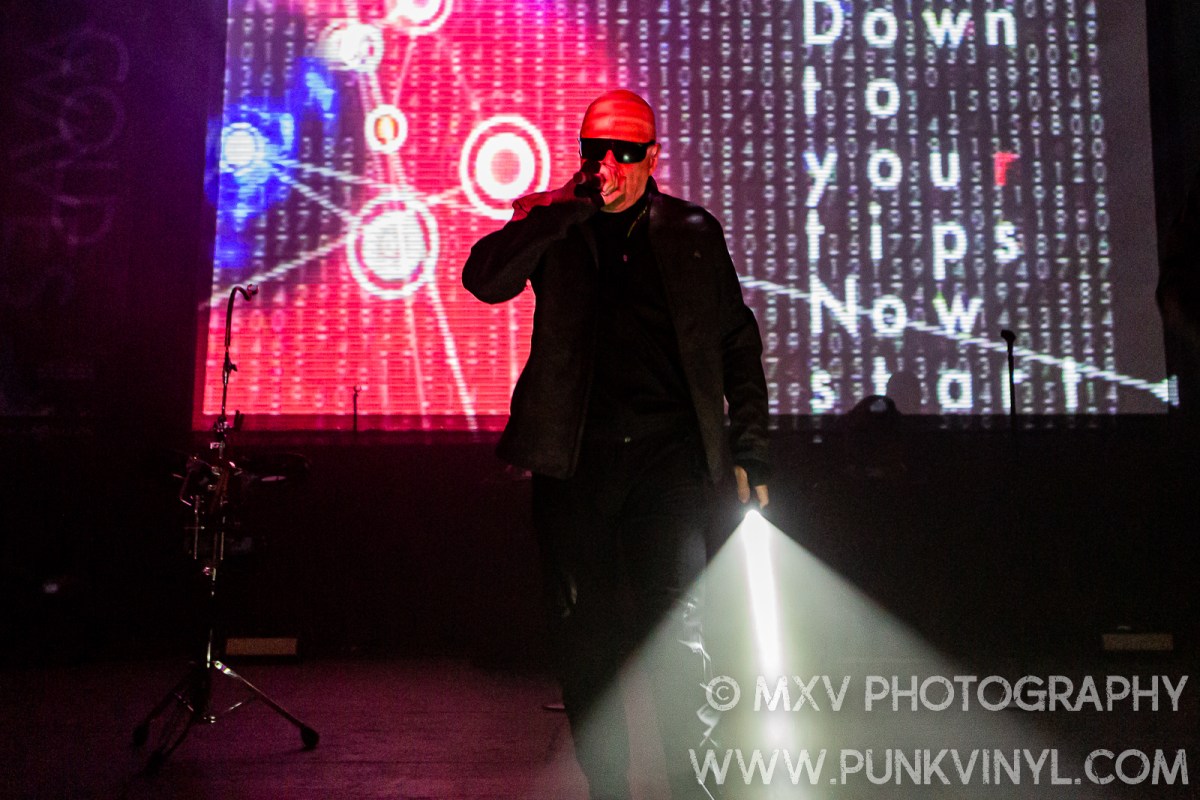 Sunday night was the final night of Cold Waves X and they closed it with two huge bands that necessitated it being held at the larger Riviera, a Cold Waves first. This show was even more significant as this is the final North American tour for Front 242, which meant this was their last show ever in  their adopted second home of Chicago.

First up was Hapax. This trio, hailing from Italy, played really great guitar-driven darkwave/post punk. Really interesting guitar work drove the mostly mid-tempo songs and they had great haunting vocals. Their songs were really catchy. Hopefully they make a return to a future Cold Waves and get to play even longer, they were really good!

Foreign Resort was next. These guys are from Denmark and also play post-punk/dark wave and boy were they good at it. Sometimes the guitar work was a little inspired by The Cure (which is a good thing) and they definitely fit right in with the Joy Division, Chameleons, Sisters of Mercy, etc. style of goth/post-punk. This is another band well worth your time to check out.

Light Asylum made a return to Cold Waves this year after last appearing in 2019. Shannon Funchess is Light Asylum and she had some small electronics set up near her microphone stand to handle the music as she did all the vocals. Hard edged electronic fueled post-punk dance music with intense vocals. Much like the last Light Asylum showing, this was extremely enjoyable.

Long time industrial music veterans, Portion Control, was next. They are a duo with one guy handling all the electronics and the other doing all the vocals. They played a rock solid set of hard edged, churning industrial dance music. They packed quite a punch and were in top form as the singer marched and danced around the stage like a man possessed while belting out his vocals. They had images playing in the background while they performed as well. They were a very welcome addition to this year’s fest and was the start of a the veteran band trifecta of the evening.

Nitzer Ebb returned to Cold Waves to a full house of extremely excited audience. It was a big deal to have them and Front 242 on the same bill, as both bands are heavyweight champions of their genre. The band took the stage and the crowd roared with excitement, and then immediately started dancing to the familiar sounds of “Blood Money” the opening track. Much like recent Nitzer Ebb shows, the band doesn’t stop playing between songs, instead they weave the songs together with various transitions as the entire set builds to an exciting climax of favorites. The pacing of the setlist was really well thought out and methodically works the crowd into a frenzy by the last third of the set. Singer, Douglas McCarthy’s vocals sounded as good as ever as he paced back and forth across the stage, decked out in a suit. The crowd was dancing their asses off, especially when crowd favorites such as “Lightning Man” and “Getting Closer” were played, and they really went for it when the band delivered a grand slam of hits to close the set with “Join In The Chant”, “Control I’m Here”, “Let Your Body Learn” and the set ender, “Murderous”. Nitzer Ebb has always put on stellar performances but this particular one felt more special, more intense, and was simply incredible.

Front 242 closed out the evening, and their roughly 35 year career of playing Chicago with a near 90 minute set that showcased a lot of their more popular records, but with so many years of great material there never is enough time to play everything you’d ever want to hear. What they did pick though featured a lot of the cream of the crop. They opened with “Moldavia” as Richard 23 and Jean-Luc De Meyer came out to a stage in total darkness holding flashlights and danced and waved them around as they were singing. It looked really cool.

They put the flashlights down and turned on a couple lights for “Take One” as visuals were displayed on a giant screen behind them. The songs sounded as great as ever, and the audience was dancing like crazy. Front 242 playing that song here in Chicago was very appropriate as they recorded a live version of that song for the 7″ that came in the first pressing of the No Comment album. From there the visuals and lightshows where ever changing from song to song, as they played some big crowd favorites like “Don’t Crash”, “Funkahdafi”, “Quite Unusual” and more. Their playing was flawless, everything sounded amazing and people went nuts when towards the end of the main set they played “Tragedy For You”, “U-Men”, and “Headhunter” before leaving the stage.

The came out for a huge three song encore comprised of “Agressiva”, “Body To Body” and “Welcome To Paradise”, it was quite possibly the strongest finish of any 242 show in history. It was a great way to say goodbye to one of the best bands of this genre, but it was also sad to think that this was the last time we’d be seeing Front 242 perform.