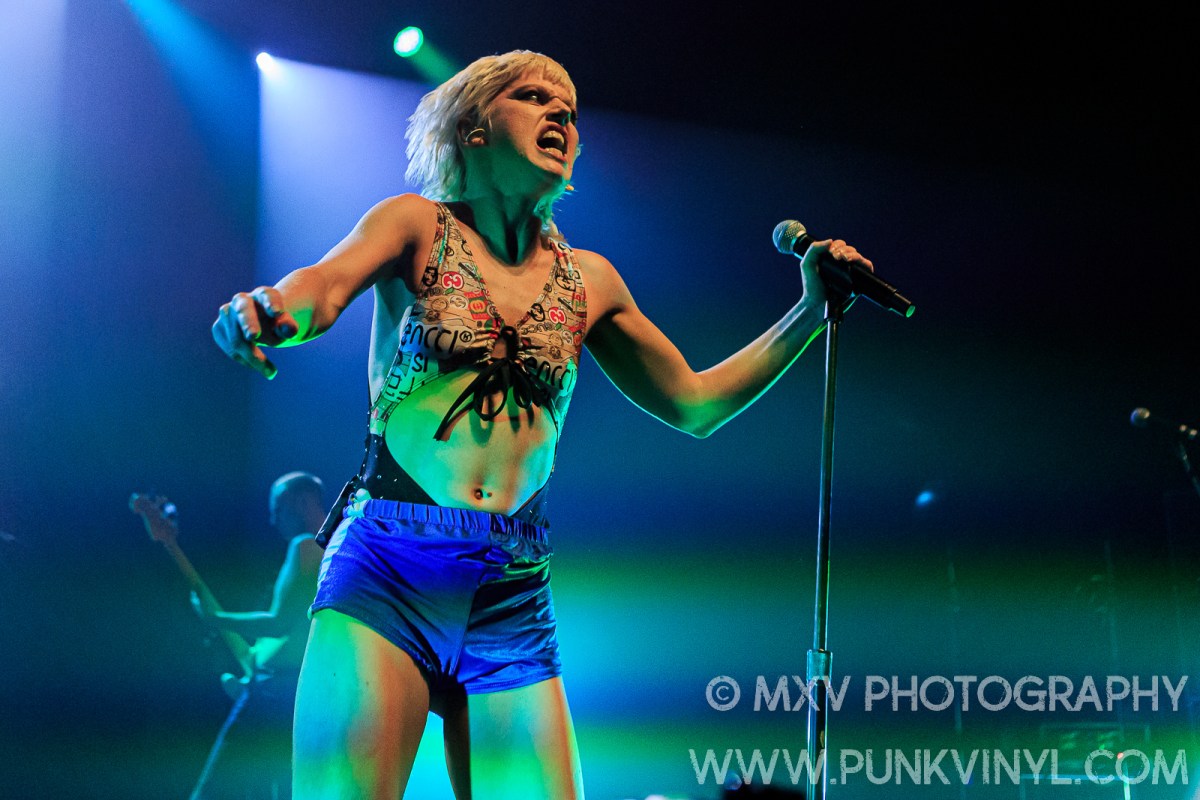 Wednesday night, Amyl And The Sniffers returned to Chicago to headline a three band bill at The Vic. It was a really good reason to go out on a school night and many people did.

Ganser was the first band of the night. Hailing from Chicago, this four-piece played post-punk that seemed heavily influenced by early PiL, especially in the guitar work. They had a bit of a goth edge to their music as well. The two females (who also handled bass and keyboard duties) traded off lead vocal duties depending on the song and both of them had great voices. They were interesting and enjoyable.

Bob Vylan was next. This was a two-piece band, and both members were named Bob! They hailed from the UK and one Bob was the vocalist and the other Bob was a drummer. The rest of the music was pre-recorded. When they took the stage, Bob the vocalist introduced themselves and said they were going to start out with some light stretching to warm up and encouraged the crowd to do the same, and he proceeded to do yoga moves while a heavy instrumental track played as Drummer Bob played his drums. When the stretching was done, they got down to business of playing a really high energy rock show. The music was a sort of Rage Against the Machine inspired hybrid of nu-metal and hip-hop. Singer Bob ran and jumped all over the place while singing and he had a ton of energy, reminiscent of a young HR so much that it was a little surprising he didn’t do any back flips. The drummer was quite accomplished and it added a heavy percussive foundation for their intense rock songs. Singer Bob talked a lot between the songs and was quite charming and entertaining. They really did a great job of warming up the crowd and getting them excited and are an act well worth seeing.

Last time Amyl And The Sniffers played in Chicago, which was earlier this year, they sold out the Logan Square Auditorium and had to turn people away. This time they damn near sold out the much larger Vic as the main floor was totally packed with excited fans of all ages, and much of the balcony was too. Amyl And The Sniffers came out and got right down to business, opening the set with “Control”, from their first album. They were a ball of fire from the start and singer, Amy Taylor was pacing around the stage, jumping up and down, and moving all over the place the entire time. She’s a great, charismatic and super energetic singer and was mesmerizing to watch. The band, playing their fast paced punk rock, sounded super tight and powerful and they made the crowd go crazy with moshing, crowd surfing, and singing along.

Amy talked a lot between songs about a variety of topics, and then they’d quickly blast out one great song after another, covering much of the material from both of their albums. Highlights included “Security”, “Maggot”, “Hertz”, “Starfire 500” and the anthemic “Guided By Angels”. It seems the further into the set they got, the more excited the crowd became and no one on that main floor was holding still and there were occasionally flying bodies from crowd surfers. Every song was played to perfection, and they all had even more power and energy than the versions on their two great albums.

Instead of doing the usual routine of playing a main set then leaving the stage for a few minutes and doing an encore, Amyl And The Sniffers just opted to play their one-hour set in its entirety uninterrupted. They kicked a lot of ass, left the crowd sweaty and tired, but left them lusting for more which is the sign of great showmanship. It was a fantastic set of energetic punk rock and we look forward to more the next time they return!