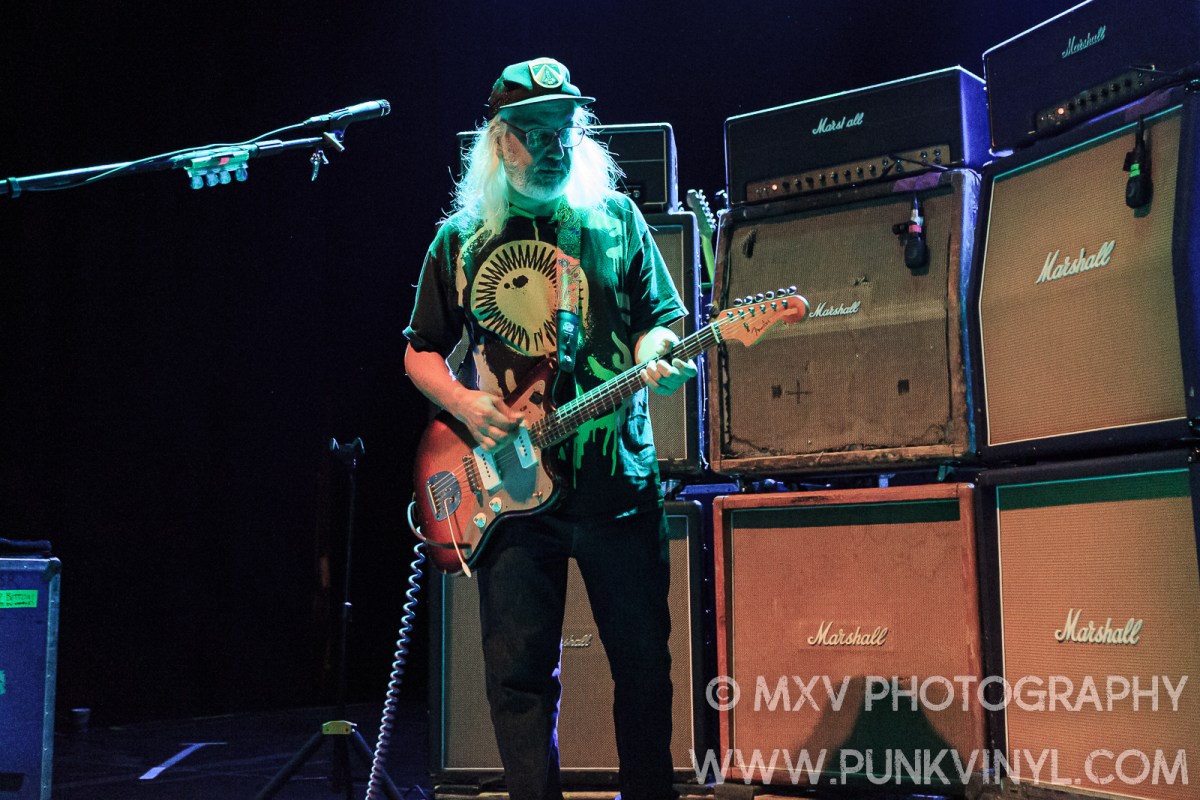 There has been so many good shows in Chicago lately and it doesn’t look like that is going to change anytime soon. Friday night, Dinosaur Jr returned to the windy city to headline a show at The Vic.It has been a few years since they last played here so they were long overdue. They packed the place too, if the show wasn’t sold out it sure looked like it was!

First up was Ryley Walker. This band played pretty mellow, mid-tempo folk/blues rock. The songs were long with a lot of noodling and they were super mellow. The singer talked a lot between songs and seemed a little nervous, he also was originally from Chicago so he shared some stories about coming to The Vic when he was younger.

Dinosaur Jr took the stage soon after. J. Mascis took his spot on the left side of the stage and was surrounded by amps that formed a sort of semi-circle around him.He planted himself there and rarely moved from that spot, in fact he had two positions, either at the mic singing or farther back closer to the wall of amps. He’d switch between those spots as needed and was all business. He tackled that guitar like a skilled surgeon, creating a massive sonic wall of guitar noise that is Dinosaur Jr.’s trademark. Lou Barlow, the bass player, was all hair and much more animated. He was moving around constantly and was not wearing shoes. His face usually buried by his long hair, he’d occasionally throw his head back to get the hair out of his face as he was rocking the bass. Watching him play is fascinating, as he strums all over the bass, even up the neck, and he too plays that thing like a surgeon and nicely complimenting Murph’s precision drumming.

The band opened with “The Lung” and immediately one noticed that Dinosaur Jr play loud, like really loud! They are one of the louder live bands these days. Everything sounded spot on, their playing, J’s vocals, the sound in the room, it was all fantastic. They quickly followed up with “In a Jar” and “I Ain’t”. Aside from singing, J. Mascis didn’t say a word between songs, he left all the talking to Lou, who would sometimes announce what song they were going to play next, but they didn’t waste a lot of time with small talk, and just let their playing speak for them, and the playing was amazing.

Things picked up even more steam mid-set when they played “Little Fury Things” and “The Wagon”, the latter getting a huge response from the crowd as that’s one of their most beloved songs. They even played a couple songs from their very first album deeper in the set which was a nice surprise and boy were those a powerful pair! The band clocked in 16 songs, concluding with “Gargoyle” before leaving the stage for a few minutes. They returned for a two song encore comprised of “Get Me” and their awesome cover of The Cure’s “Just Like Heaven”. When the dust settled, they played about 90 minutes and left the huge crowd happy, and probably with ringing ears, but it was more than worth it!