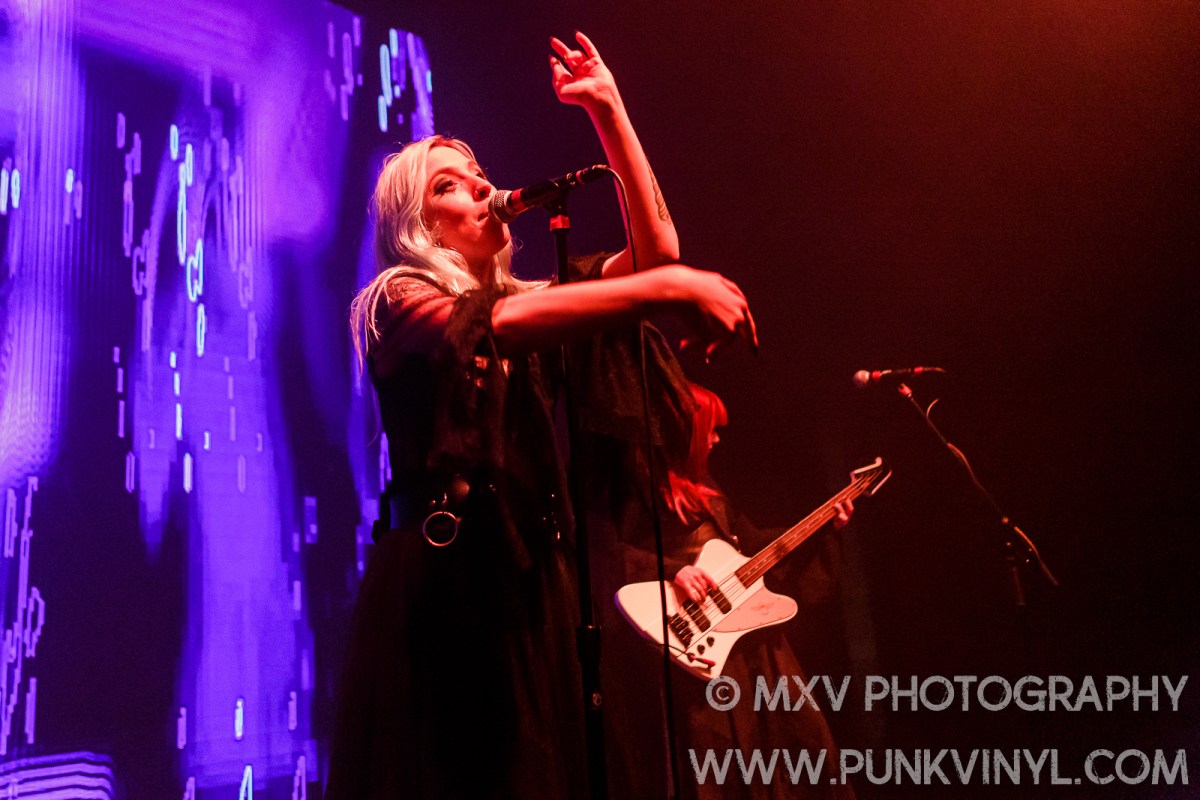 Wednesday night, Kaelan Mikla returned to the USA after a three year absence from touring to headline a show at Chop Shop, a very nice venue in the Wicker Park area of Chicago. The last time (which was also the first time) Kaelan Mikla played were was at Cold Waves Festival in 2019 at Metro. They were one of the earlier acts of that particular evening and they totally stole the show. In true goth fashion, this was a later show, especially for a weeknight.

First up was Panic Priest, which was a one man show. He sang and played guitar and manipulated electronics. Jack Armondo, who is Panic Priest, bills himself as a “dark crooner” and that’s a very accurate description. The songs are largely synth driven dance pop with dark overtones. You can hear elements of bands like Depeche Mode in there, and other 80’s style post-punk/synthwave. The songs were really catchy and he had a really good singing voice. His half-hour set was quite good.

Next up was KANGA, who is a female solo artist, produced a solid set of electronic dance/pop that had a lot of people dancing and was super infectious. Her vocals are silky smooth and quite soothing. She covered a lot of ground moving around the stage while singing, occasionally coming back to her gear at times to manipulate sound. She was really captivating and unless you were so busy dancing that you weren’t looking at the stage, it was hard to stop watching her. A great performance, and an artist that should be on more people’s radars.

Kaelan Mikla was next and the three ladies took their positions on the stage, and the screen behind them was showing custom made graphics tailored to each song they played. The lighting and visuals were different for each song, which felt like each had a unique theme, but as a whole it was very dark and moody which matches Kaelan Mikla’s music perfectly.

The band opened with “Svört Augu”, which is the first song on their most recent album,Undir K​ö​ldum Nor​ð​urlj​ó​sum. This, and the other new material, sounded really great lin a live setting. Sólveig Matthildur handled all the synths electronics, backing vocals, and flute on the left side of the stage, Margrét Rósa played bass and was mostly in the shadows except when singing backup vocals on the right, leaving Laufey Soffía the center stage to handle lead vocals. The songs were dark, synth-punk/post-punk/goth, with often times beautiful melodies with vocals that range from beautiful to dark and haunting.

“Draumadis” was the second song and featured some beautiful vocal work and great syths. From there the band played an hour or so and featured a good mix of older favorites and new material, each song sounding better than the last. The performance was nothing short of magical and they had a captive audience for the entire time, no one was looking away, everyone was giving them their full attention (and plenty of people were recording parts of the performance on their cell phones to have a memento of this special performance. Kaelan Mikla is such a wonderfully unique band and this show was something really special.

At the end of the main set, the three ladies took center stage, thanked the audience, and took a bow before leaving the stage. A few minutes later they returned for an encore where they played “Nornalagið” and then took one more bow and called it a night. It was an incredible show and hopefully they’ll be back again far sooner than three years from now!