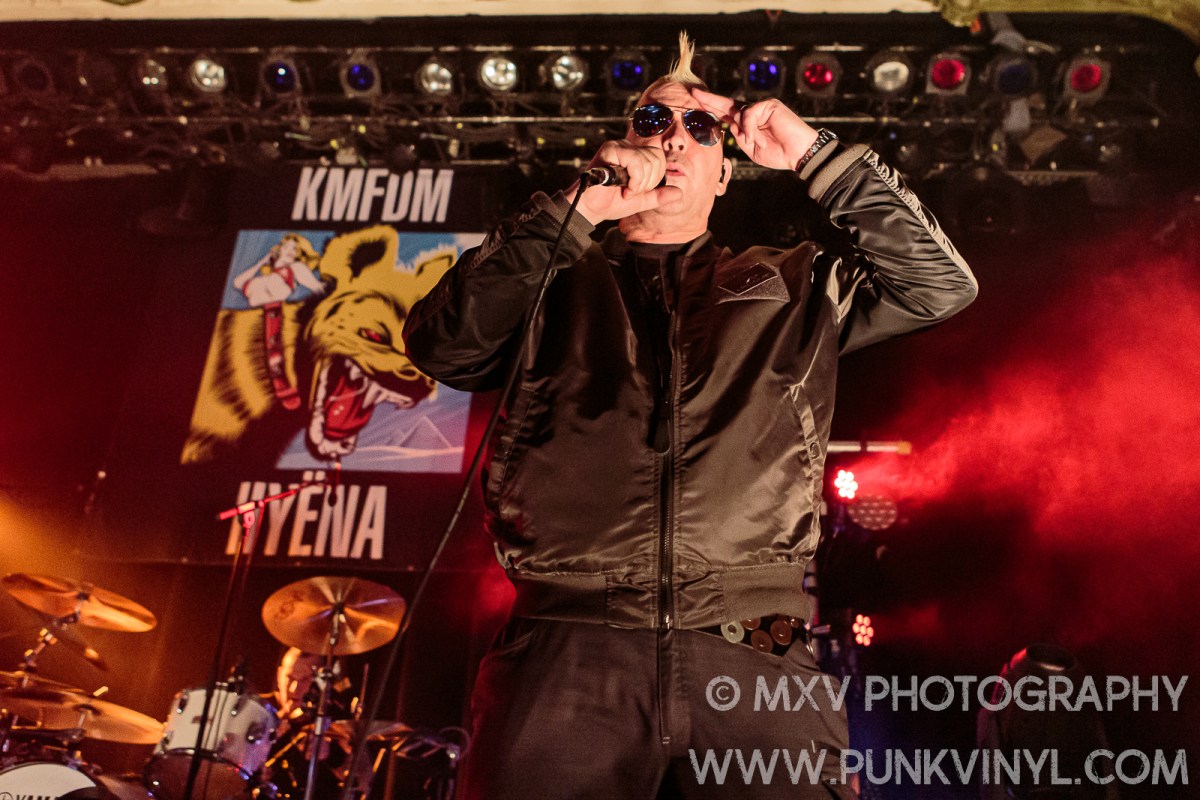 Last night, KMFDM sold out the Metro when they headline a show in their first return to Chicago since before the pandemic. They were part of a two band bill and the place was already packed solid by the time the first band took the stage.

First up was Chant. This two piece were really heavy on the percussion and guitar. Great tribal, complex drumming and heavy guitars set the foundation of their blend of industrial rock. Take a little bit of Neubauten, mix it with some Ministry, and turn up the low end and intensity and you have Chant. The percussive nature of their music was really satisfying and they put on an amazing 45 minute set that the entire audience was into.

KMFDM was next and you could not squeeze another person into that club when they took the stage, They were packed in there all the way to the back stairs! The four band members took the stage, which had two giant podiums in the center for Sasha and Lucia, who both handle all the vocals (and Sasha also handles some electronics). These podiums had lights on the front of them and the stage was decked out with a lot of custom light rigs and fog machines that made for some great visual atmosphere as the band plowed through a set of their industrial metal hybrid.

They opened with “D.I.Y.” and sounded in fine form. The guitars were heavy, the pace was fast, and everything sounded super powerful. Sasha would often come out from behind his podium to get closer to the audience on either side of it and Lucia staying mostly behind hers. Guitar player, Andee Blacksugar, moved from one side of the stage to the other and he was melting faces with heavy riffs. Everything was loud and punched you right in the gut as expected.

“All 4 1” was up next, followed by “Light”. From there they played nearly non-stop and focused heavily on their more recent material, so heavily in fact that they didn’t even play anything from their earlier Wax Trax era albums at all during the main set. If you haven’t been keeping up with their material of the last decade or so then you may not have been familiar with nearly anything they played this evening. While this isn’t necessarily a bad thing, it seemed odd that the band wouldn’t at least touch on a couple of songs from the Wax Trax years in the city that was the headquarters to the label that broke them in North America. The only song they played from that era was part of the encore and that was a reworked version of “Godlike”.

During the middle of the set, they brought out another vocalist who sounded like a rapper, to sing a pair of songs. Lucia handled lead vocals on a couple of tracks. “KMF” sounded great with the “Kill Mother Fuckin'” repeated vocal samples. They played around 75 minutes before leaving the stage for a few minutes, then returning for a three song encore that somehow did not include “Juke Joint Jezebel”, again a head scratcher of how the band wouldn’t play their most popular song, one that really blew them up on a much bigger mainstream scale when it was released.

Odd setlist omissions aside, and you have to respect the band for having the bravery to play what they want and not what’s expected, KMFDM put on an excellent, high energy and powerful set that was a lot of fun from start to finish and it is great to see them on stage still passionate about playing to a live crowd after more than three decades and they show no signs of letting up.