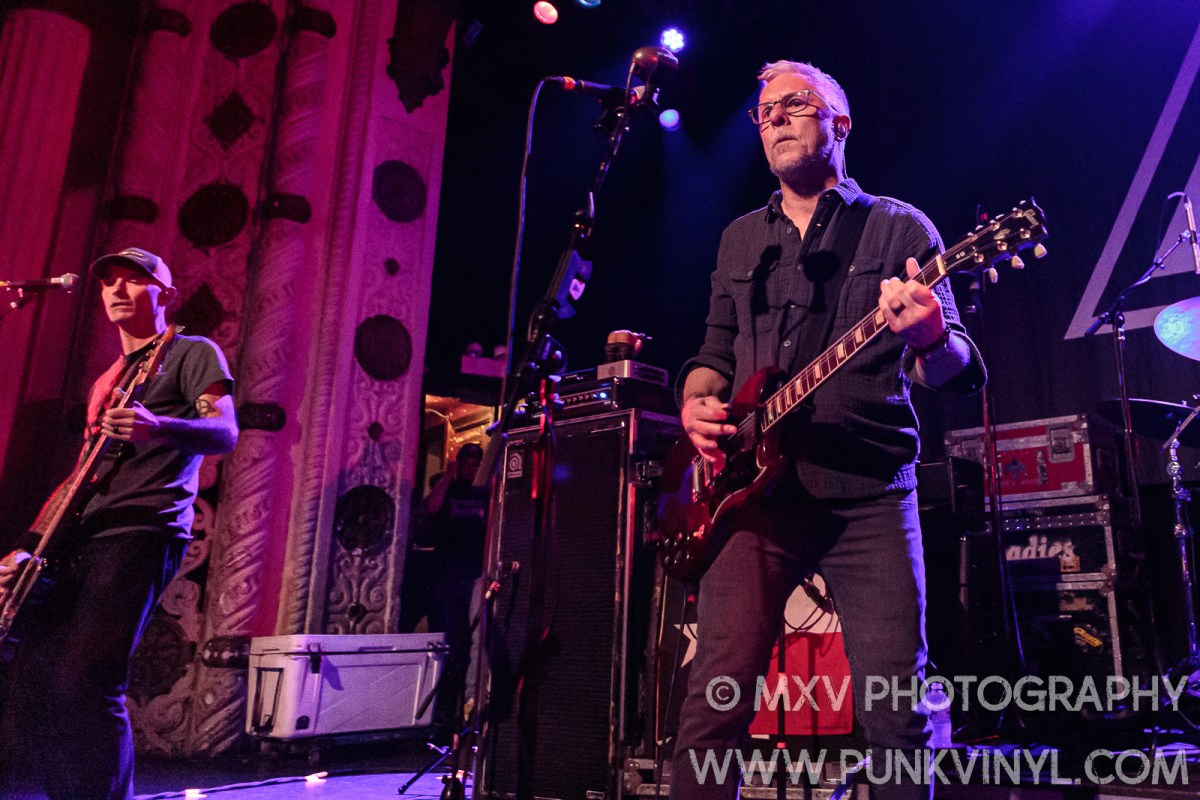 Sunday night, after being rescheduled more than once due to the pandemic, Toadies stopped in Chicago to headline a sold out show at Metro as they toured to celebrate the 25th anniversary of their popular debut album, Rubberneck. They are touring with Reverend Horton Heat and Nashville Pussy, which makes for one heck of a strong lineup.

Nashville Pussy were up first. This four piece have been around for a long time and have quite a loyal following of their own. the two female/two male band delivered a stellar set of their raunchy, high energy, southern fried rock. The songs were thick and in your face, heavy on the riffs and fast paced. They kicked ass from start to finish and floored the audience. It was a main event caliber performance to say the least and the audience loved them.

Reverend Horton Heat was next. This long-time trio, led by Jim Heath, played their third album, Liquor in the Front, in its entirety. Their blend of rockabilly, psychobilly, and a hint of country built them up a pretty sizable fanbase, many who were in attendance this evening. The band played well, Heath talked a lot between songs about a variety of topics, and on top of the full album, they also played a small batch of other material and a cover song or two, including one of “Ace of Spades”. Their performance clocked in at about an hour.

People were packed in the club on both floors excited beyond belief when Toadies took the stage. They opened with “Poly Jean”, a track from their 2017 album, The Lower Side of Uptown” and what a strong track that was to open with! It packed a huge punch with its meaty riffs and shout along chorus and showcased what a kick ass rock band they still are for those not familiar with anything beyond Rubberneck. They played four more newer songs before getting to the Rubberneck portion of the set.

When they got to Rubberneck, they played the album in order and the diehard fans were singing along to every song chorus and jumping around. All the material sounded even better live than it did on that album (which is no slouch), with added layers of thickness and “oomph”. They band were way into their performance too and were enjoying themselves on stage as they played their classic material. As expected, the place went crazy for “Possum Kingdom”, the song that put them on the alternative rock map and one that as aged beautifully.

When the band finished Rubberneck, they gave a heartfelt thanks to the audience and left the stage for a quick break before returning for an encore. They didn’t just do a song or two for the encore, they played five songs! A couple of them were newer songs from the album they are working on now and sounded great, which means the band will have another solid album to add to their discography next year. This show was easily worth the very long wait for the fans who purchased tickets when this tour was initially suppose to happen and that entire audience went home very happy.