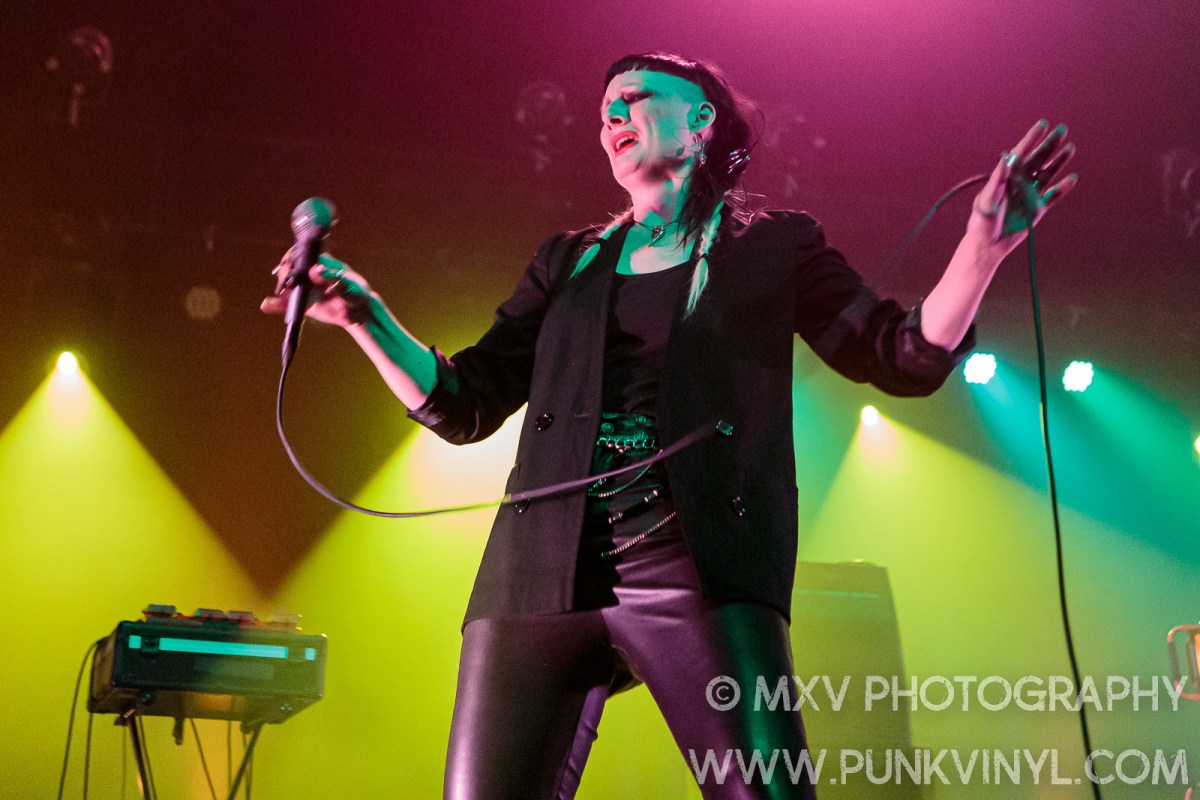 Friday night was the first night of a new three day fest called Sanctum Festival which features dark music (darkwave/goth/industrial). Each night featured a different lineup and the first two nights were held at Thalia Hall and the final night was at Empty Bottle. In between band performances they had a variety of DJs playing music as well.

Visceral Anatomy kicked off the festival. This two-piece band hails from here in Chicago. The band played rather fast paced EBM which was great for dancing with great beats and cool electronic sounds. Vocalist, Hannah Avalon had a little bit of a Siouxsie to her vocals and did a great job. They played around 40 minutes and it was a really good set that got the night started off right.

Hide was next. This Chicago based duo played in total darkness with only a single strobe light that would illuminate the stage as Seth Sher crafted some really heavy industrial music complete with layers of sounds and samples. Singer, Heather Gabel was writhing around the stage delivering haunting vocals that matched the intensity of the dark music. Gabel’s stage presence was mesmorising and at times downright frightening. Any fan of the darker and harder style of theatrical industrial music (think Skinny Puppy’s most experimental stuff) will find a lot to like about Hide.

Blu Anxxiety, a band from New York, was up next. They played really catchy electro/industrial music. Their songs mixed the dance elements of EBM with a more punk laced industrial edge (sort of like Front Line Assembly at times). The singer was really animated and was dressed as a nun. He was running and dancing around all over the place before deciding to perform the second half of their set out in the crowd dancing with the people as he performed his vocal duties. Super high energy and a lot of fun.

Long time electronic music veterans, Psyche finally played here in Chicago! Having this 40 year veteran act finally play a show like this here in Chicago was a real treat and way, way overdue. Singer and founding member, Darrin Huss was in fine form as the band played a great selection of material mainly from their first five albums, plus one of the new songs from the most recent single. They opened with the best Psyche song of all, “The Crawler”. That alone would have been worth the price of admission but so many great songs followed for the next hour. We got such greats as “The Saint Became a Lush”, “Misery”, “The Brain Collapses”, “Unveiling the Secret”, “Uncivilized” and so much more. Darrin danced and sang while Stefan Rabura made musical magic on the stage. This legendary band really should be on a lot more people’s radar here in the United States and hopefully this show exposed a bunch of people to the band who may not have been familiar with them. It was truly the highlight of the entire weekend.

Adult. was the final act of the evening and what a way to close a show. This duo have been on fire the last few years putting out their best albums and becoming one of the top live acts of their genre. Adam Lee Miller stands behind a fortress of musical equipment and creates great, hard edged industrial style music with great rhythms and complex layers of sound while his partner, Nicola Kuperus handles all the vocal duties with a microphone in each hand. Her dual mic technique is really unique and cool as they are set up for different vocal effects. She stalks around the stage dual fisting these microphones and just commands your attention. Super high energy songs that will punch you right in the gut and keep you coming back for more. They are an amazing live act and this set featured a lot of their recent material with a couple throwbacks to early works, plus a Screamers cover of “122 Hours of Fear” which very few in the audience were likely familiar with, but they did the song justice. Their hour long set flew by in the blink of an eye.

The first night of Sanctum was as good of a show as you could ever hope for. It featured a great, diverse lineup of bands spanning multiple generations. The vibe in the venue was really good and welcoming with lots of people dancing all night and having a great time.