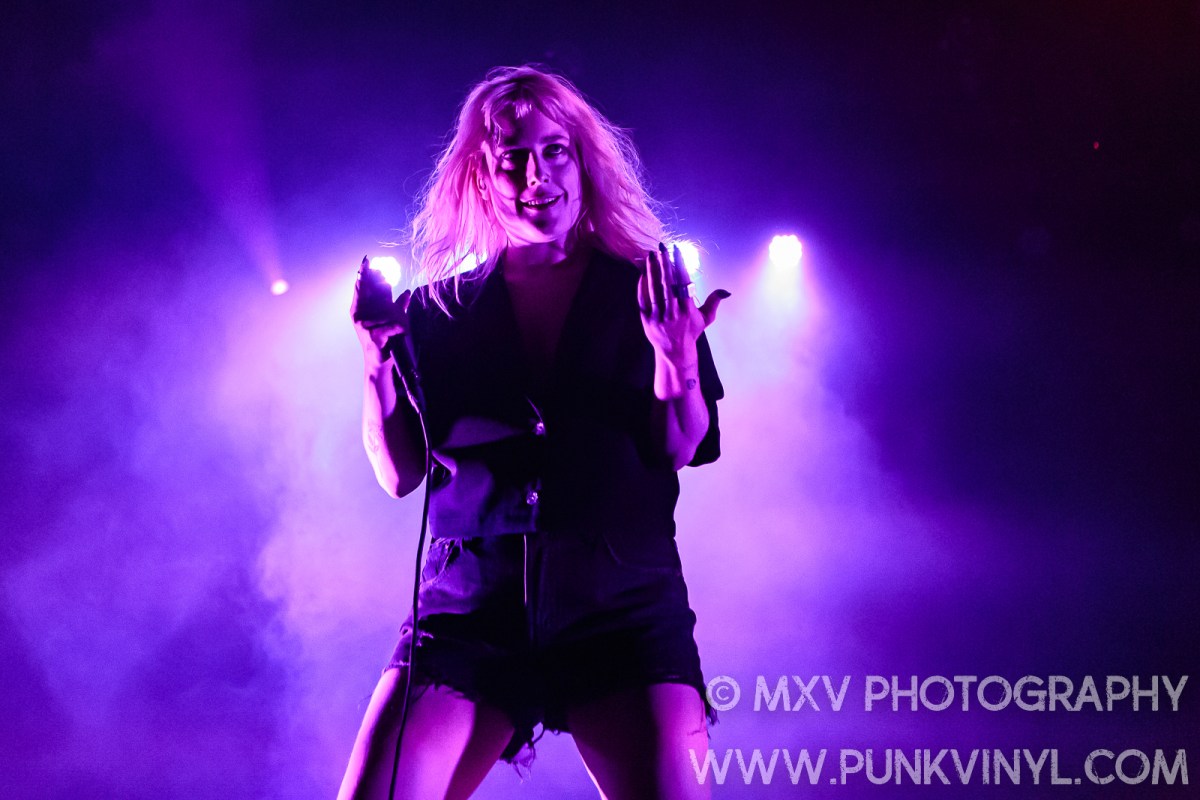 Saturday night was the second night of the Sanctum Festival and it not only had a solid lineup, but it was being headlined by Boy Harsher. Thalia Hall filled up quickly that evening and it had an even larger turnout this night than the already impressive one the night before.

Those that showed up early were treated to an enjoyable performance by Club Music. This was a female solo act and she played some really good industrial dance music. Great beats and good vocals made for another great start to the night.

Next up was Sacred Skin. They were a new wave/synth-pop band with a great retro throwback sound to them. Catchy songs, great synths and melodic vocals. It was like taking a trip back in time to the 1980s and who wouldn’t enjoy that? They were a fun 45 minutes that hit all the good nostalgic buttons.

Pixel Grip soon followed. This band was a real highlight of the evening. They played EBM/techno that was very beat heavy and inspired a big portion of the crowd to dance. Their songs pretty much left anyone in the audience powerless to resist wanting to move their feet and their frontwoman was very striking as she danced and walked around the stage. Their 45 minute set went by very quickly because it was just so good and energetic.

Riki was a solo act that is the brainchild of Niff Nawor, who hails from Los Angeles. She played dark synthpop and had a really nice singing voice. She danced and posed a lot during her performance and had more than a few people in the audience swooning over here. Her faster tempo songs were good for dancing and those unfamiliar with her probably became fans after this performance.

When Boy Harsher took the stage they received a roar of applause from the full house in Thalia Hall. This Massachusetts duo has really built quite a following over the past few years and they put on a clinic of darkwave electro dance/pop tunes. Augustus Muller stood behind a fortress of electronic musical equipment and created all the music while vocalist Jae Matthews hypnotized and seduced the audience with her atmospheric and sometimes haunting vocals. She danced around the stage while singing and most of the audience were dancing along as the band played one amazing song after another. It truly was a headline caliber performance and the band really showed they have something special which is what built them up such a loyal following. they played over an hour and when they left the stage people were still hoping for more!

The second night of Sanctum Festival was every bit as great as the first and the event was really something special and hopefully this becomes an annual event.