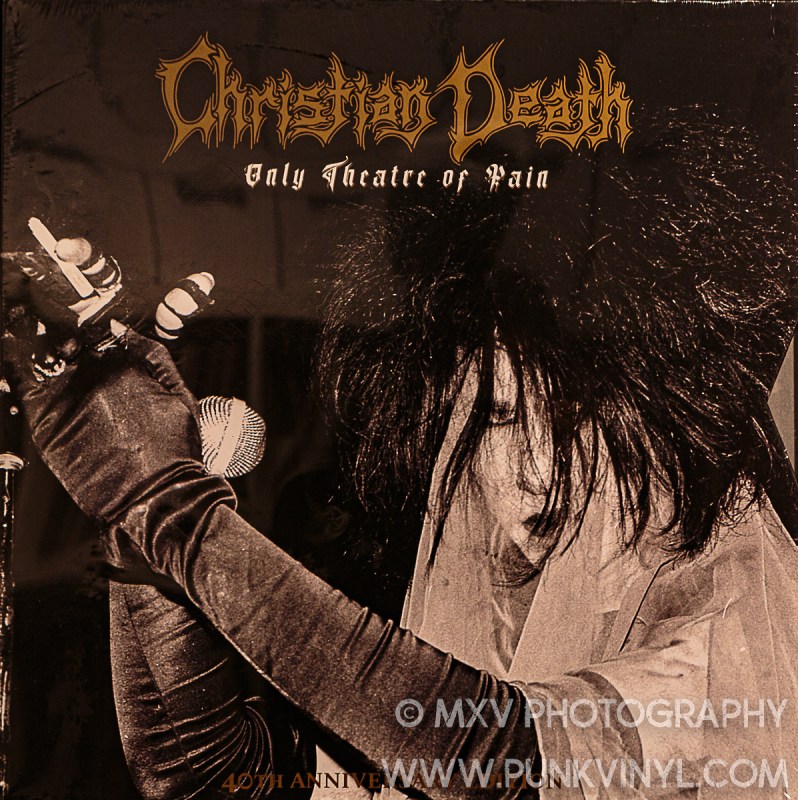 Continuing on catching up with recent colored vinyl editions of classic Frontier Records releases, we now look at Christian Death. Only Theatre Of Pain was the album that pretty much set the blueprint for death rock back when it was released in 1982. It is another one of those timeless classics that sounds every bit as good, if not better now than when it was released over 40 years ago. 40 years! Where did the time go?!

Since the last Christian Death feature here, the album has been released on a few new colors of vinyl, as well and a really special deluxe edition. Let’s take a look at them. 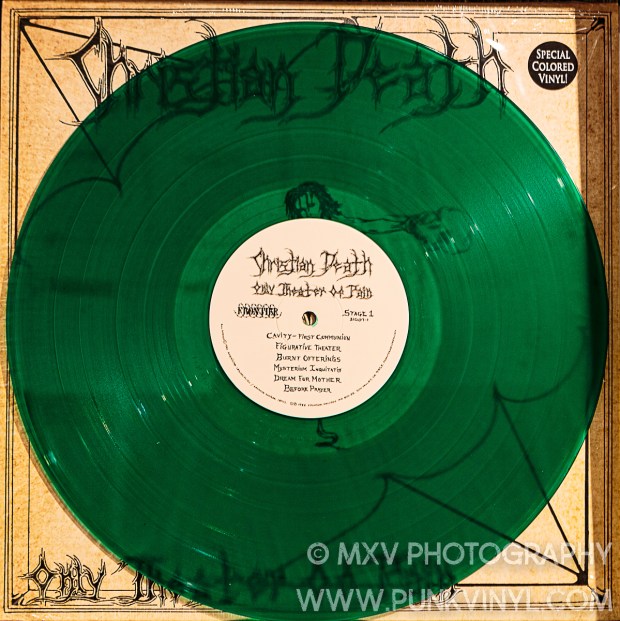 First up we have an emerald green edition. This one looks really neat. Much like all recent editions, this is the remastered version with the new Rozz Williams cover art, which was the original concept art for the album. This emerald green vinyl was limited to 1000 copies. All copies of this album since it started coming on colored vinyl comes with a lyric sheet just like the very first 1982 pressing had (but none of the subsequent pressings had until the colored ones started ten or so years ago). 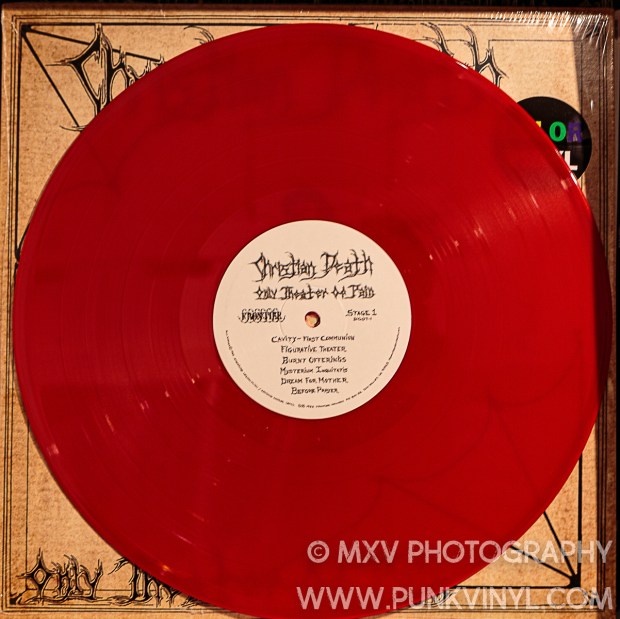 Next up is opaque red. This one has the new colored vinyl hype sticker This one was an edition of 1000 copies and was pressed at Furnace (they used to be pressed at Rainbo until the plant closed down). 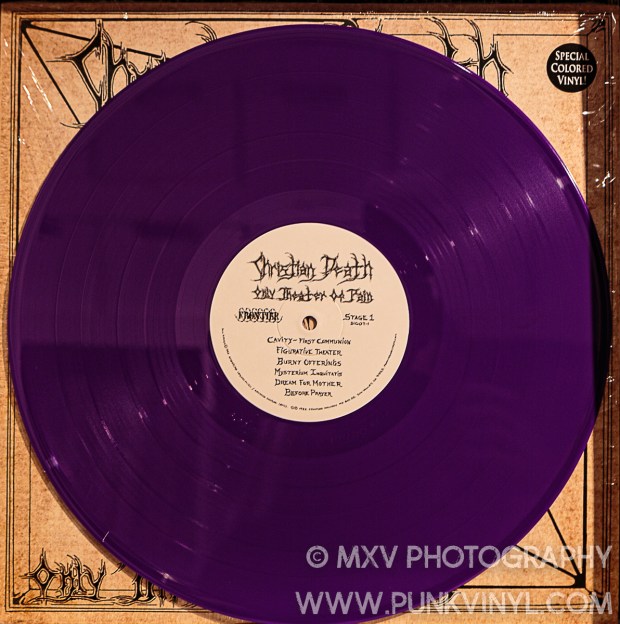 Opaque purple vinyl (pressed at Furnace) is the next color and one of the two most recent. This one has the old style colored vinyl hype sticker and was an edition of 3000 copies. It looks pretty sweet and is super goth friendly. Is there a more appropriate color for this record (other than black) that fits with the deathrock motif? I can’t think of one other than maybe glow in the dark, but who wants all that surface noise that comes with the glow in the dark vinyl?! 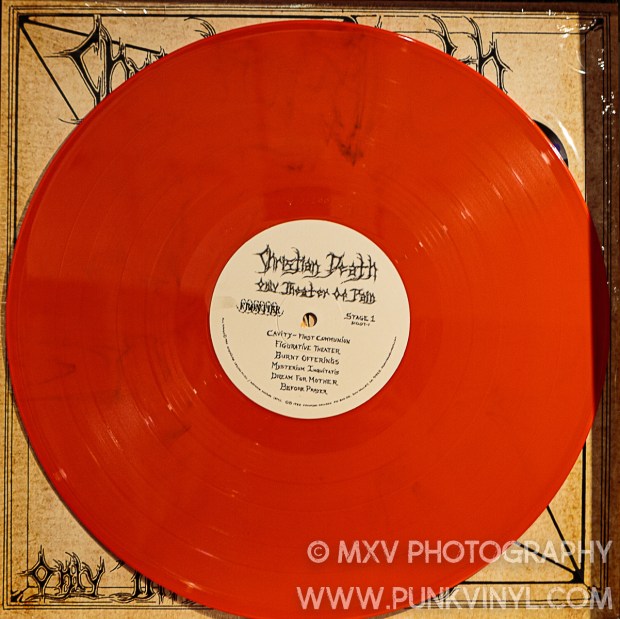 Opaque orange vinyl, which sort of compliments the parchment colored cover art, is the most recent standard color edition. This one wwas limited to 1000 copies. 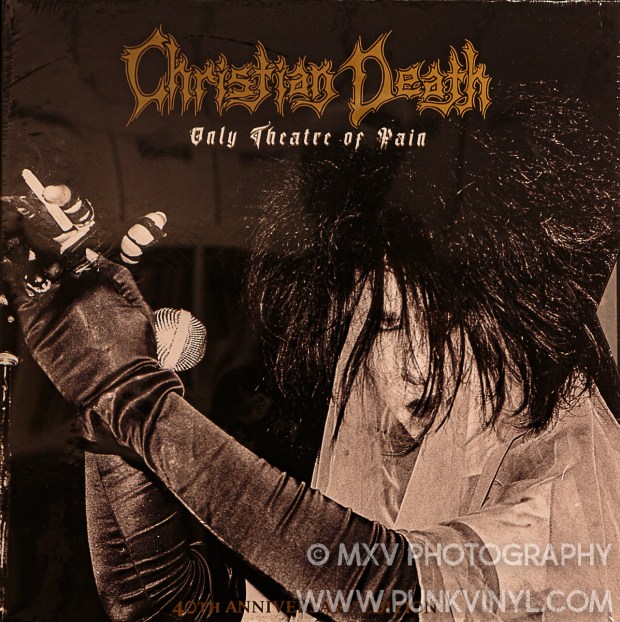 Last but not least, we have this amazing 40th anniversary deluxe edition box set. This box features a beautiful hardcover book of Ed Colver photographs of the band that also includes a band history and a lot. more. There are hundreds of amazing photos that have never been published before in this book, it is incredible! The band history is a great read too. Not only do you get this incredible book, but you get the 40th anniversary edition of Only Theatre Of Pain, housed in a gatefold sleeve that has the original edition cover art (black and gold). The insert has been moved into the inside gatefold, and it has a second album with bonus tracks! It also includes a huge fold-out poster. The records are pressed on death rock black vinyl and the entire package is simply stunning. This is also the only place you can get this special edition of the album and believe me this whole package is well worth tracking down. The whole package also weighs a ton! This is one of the nicest, if not the nicest, anniversary deluxe editions I’ve ever seen for any album in any genre!

Most of these are probably sold out but may be available in stores. A couple of colors are left over at the Frontier Records bandcamp page.