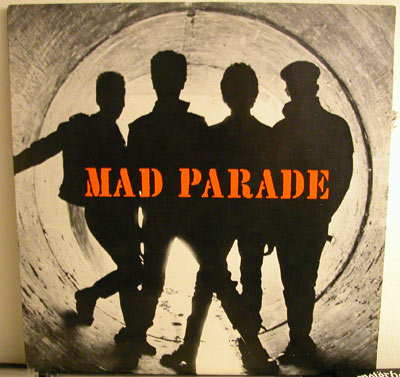 I first heard Mad Parade on the Barricaded Suspects compilation LP. Their song was one of the best cuts on that compilation. I, of course, scooped up everything they released at the time, which was this album, and a 7″ on Toxic Shock Records (on which their cover of “Mother’s Little Helpler” would get heavy play on my radio show in high school). Mad Parade were really ahead of their time and were one of the pioneers of the whole pop-punk sound, yet they received very little recognition, and sadly went largely overlooked.

I contaced Joey Kelly, founding member of Mad Parade and asked him to share a little history…

Mad Parade started out in 1982, all the bands from LA were playing hardcore and our influences were from NY and the UK – 999, Dead Boys, New York Dolls, Buzzcocks, Iggy. We wanted to be different instead of the circle jerk wardrobe, we loved Clockwork Orange so we wanted to dress like droogies, and we did for 3 shows…until the singer of the StepMothers showed me the Adicts 1st single so we dumped that idea but we still wore dock martins, leather jackets etc. We wanted our look to be interesting along with the music. We made a demo tape with “REAL Horror Show” and “Sex and Violence” that Rodney on the Roq played every week back in 82. The record finally came out in 1984 and it was on rotation on KROQ…and then the fan mail all over the states came, at least 20 letters a week. We were jazzed.

We started playing great shows with our heroes Social Distortion, 999, Toy Dolls, The Lords of the New Church, and getting paid well for a punk band touring all the time. Back in those days punk rock was rare, not like today but I would say there are way too many bands that sound like us that are making millions.

Back then Social Distortion was probally the only one that mixed pop and punk along with image. Which reminds me three times Mike Ness never had his Amp at shows with us and he used to borrow mine. They were getting 1500 for the show and we were getting 200, so finally I got pissed. I told him, “dude you never have your amp”, So I told him he should pay me. He said, “Ahhhh how much?” I said, “200”, that was the last time we played with Social Distortion. a year later I saw him and our relationship was never the same, along with their drummer Chris who fucked my girlfriend when I was on tour. That was the scoop with those guys, then GoldenVoice started not to book us anymore.

BYO did our next record, A Thousand Words and it sold pretty well. See back in those days, bands would help each other unless they started to take advantage, like Mike Ness. Great bands who we helped and helped us: MIA, UK Subs, Youth Brigade, Vandals, Red Kross, Stepmothers, CH3, Lower Class Brats.

We’re doing a tour in April with The Undertones and going to Europe shortly with The Lurkers after that. We just want to hve fun, break even, and drink beer.

The band’s second album, released on BYO, A Thousand Words, was a little more on the pop side than the first, a bit more polished but still a really good record. They still put out records from time to time and they still sound pretty much the same, which is a good thing. The band has a website. Their early recordings have been reissued by Dr. Strange Records which you can get direct from them, or you can get them here.

There were two pressings of this record. The original pressing was on Important Records and is pictured above. In 1987 Gutterwail Records reissued the record with a different cover (that looks like a disco record or something) which you can see below. 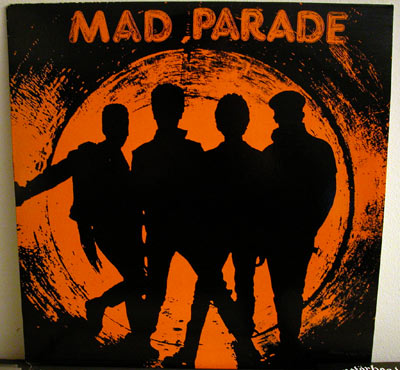