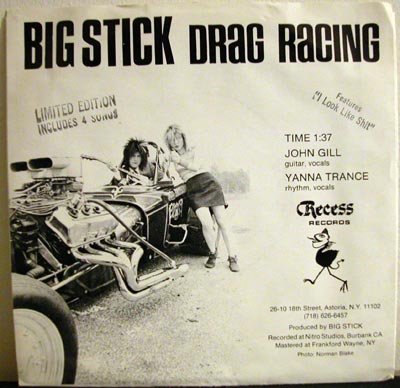 Big Stick were a two piece art-punk type band from New York. They formed in 1985 by John Gill and Yanna Trance, who have been the sole two members throughout their career to the best of my knowledge. They had a very unique sound, mixing drum machine beats with noisy guitars and samples that resulted in a demented sound not heard before.

Their first release was this 7″ which came in two different versions. There was a 2 song version, and a 4 song version. Both versions has the exact same sleeve (made for the two song version), the only difference being they stamped the sleeves on the front for the 4 song version to indicate the number of songs on the record (see picture above, and click the link below to see the other version). Why they chose to release two different versions of the same record is a mystery to me, and one that hasn’t been explained anywhere I’ve been able to find.

After the did this one, they put out a 12″ EP on Buy Our Records (the label owned by members of AOD and Bedlam) and appeared on a couple of Blast First compilations. They did an occasional record or two during the 90s and also put out a couple records under the name Drag Racing Underground.

Where are they now? They appear to still be around in some capacity, and have a website. This record and the Crack Attack EP were compiled together on a LP/CD called Crack ‘n Drag which is only available as an import.

As always, if you have any additional information or are a member of Big Stick, please get in touch. 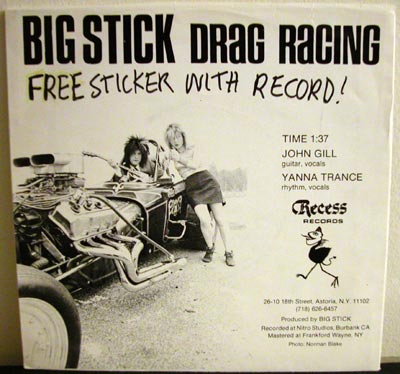