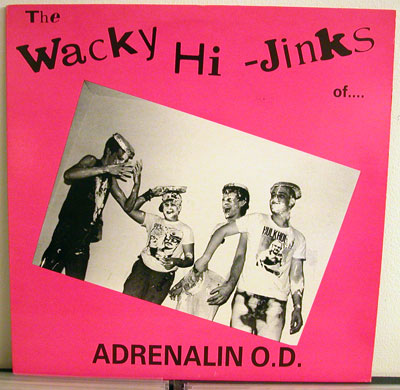 The first thing I ever heard from this band was their cover of the Brady Bunch theme on the Flipside Vinyl Fanzine Volume 1 compilation. I thought that it not only kicked ass, but it was pretty funny to do a cover of that. I immediately made a mental note to buy anything else they were on. That led me to the now-classic We Got Power: Party or Go Home compilation where their song, “World War 4” (that ends with their rendition of “Pop Goes the Weasel”) was a standout and also continued to show the bands sense of humor.

Shortly after that, my friend Gub (who back then was known simply as Scott Conway) brought the first AOD album to school and gave it to me to borrow. He never got it back! I convinced him that it needed to be mine and gave him something for it, like I bought him lunch or something. I instantly fell in love with the record and practically wore it out by playing it so much.

Adrenalin OD (or AOD for short) formed in fall of 1981 by Jack Steeples, Dave Scott, Paul Richard and Jim Foster. They played a bunch of shows and practiced for a year or so and saved up enough money to put out their first record, Let’s BBQ, which also resulted in them starting a record label called Buy Our Records.

Around the time that 7″ was released, Jim Foster left the band and was replaced by their friend Bruce Wingate. This lineup would remain for the rest of the band’s career. A year or so after the release of their 7″, the band recorded and released their first full-length LP, The Wacky Hi Jinks of Adrenalin OD. They also appeared on a handful of compilations including the now legendary New York Thrash compilation on ROIR records. It was originally a cassette only release, which has since been reissued on vinyl and CD.

The band toured plenty and also kept their label going until they were too busy to do both and handed the reigns over to their friends in Bedlam to continue with the label business so they could just worry about being a band. AOD released another 7″ and then their second album, Humungousfungusamongus in 1986. They also were going to release a split live flexi disc with Bedlam, but the one company that was making flexi’s back then, Evatone, refused to press them because they were offended by the foul language on the Bedlam side (Evatone, it turns out, were a religious company). The split was eventually released as a regular vinyl single with no picture sleeve that was sold at shows and through mail-order. It had numbered and stamped labels, and came with an insert with the song info on it. 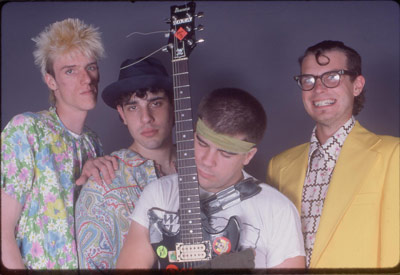 After the second album, the band slowed down and started venturing off in a more musical direction. This resulted in the Cruising with Elvis in Bigfoot’s UFO LP and the Theme from an Imaginary Midget Western EP. Both of them were pretty good records which I still enjoy today, though bared little resemblance to what came before it.

In 1989, with Buy Our Records closing shop (likely a result of being ripped off by countless distributors that went bankrupt at that time), the band found a new home on Restless/Enigma Records and their sound changed even further, however not for the better. Their final release, aptly titled Ishtar, was to put it kindly, a bad record. Even the band will tell you this. In fact, Bruce Wingate chimed in with this:

The first wave of hardcore was essentially killed off by metalheads and straight edge jocks in 1986. Not relating to either type was what got us into punk rock to begin with!

We made a conscious decision to bail on that whole scene, and started playing more ’77 style punk. In retrospect, I think the Cruisn’ with Elvis album sounds rather British (we all loved The Undertones, and Stiff Little Fingers.) Unfortunately we jumped the gun on declaring punk rock was “back”. Everyone else was into double bass drums or unity!

By the time the last album was made, Ishtar, we were sick of; each other, our shitty manager, and “wacky suburban hardcore.” We had been playing punk rock for ten tears by 1990, it was a thankless task before Nirvana and Green Day made it a potentially lucrative one.

Ishtar was our attempt to sell out and was made while we were breaking up. Shortly after it came out we were about to go onstage at Maxwells in Hoboken and decided to make it our final show.

A few weeks after its release, Restless/Enigma went out of business and the band decided they had enough and called it quits. The band reunited for the New York Thrash reunion show a few years ago at CBGB’s as a sort of closing chapter to the AOD book.

Where are they now? Dave Scott resides in Florida and designs merchandise for bands and manages a band called Nutrajet. Paul and Jack were in a band called Sux and also The Kowalskis. And as for Bruce, aside from playing in Brunch Mummies…

As for me post-AOD, you might want to mention that I was the musical director for two tours by cult singer/songwriter Harvey Sid Fisher (of Astrology Songs fame!) …and that I found Ben Weasel marrying my ex-girlfriend to be a little TOO derivitave!

Years ago, when CD’s were just starting to catch on, Buy Our Records released the first two AOD albums on a CD. However the intro to the song, “Rah Jah” was shortened and altered in fear of a lawsuit for using such a large sample. This carried over to the reissue of the first LP and 7″ (along with most of the compilation tracks) on Grand Theft Audio titled Sittin’ Pretty.

Bruce had this to say about the song…

“Rah Jah” was one of the songs written before I joined AOD, so I can’t be blamed that it was originally called “Mr Rogers is a Child Molester”.

If anyone is wondering how to achieve that sludgy guitar sound and drums that sound like cardboard boxes, here is how to do it:
First, pick a studio that has never recorded punk rock, preferably one owned by a guy named Vito. Then, adjust your amp until your guitar sounds like a swarm of bees. Soon after, get the pot dealer who runs your record label to have buckets of fried foods and more cheap beer delivered. You are now ready to “roll tape.”

I’m sure there was a logical explanation of why we changed the title to “Rah Jah”, but frankly all I remember from twenty-one years ago is that we were really stoned and those buckets of food went quick!

Relapse Records has recently reissued Humungousfungusamongus and Munster Records a few years ago released the bands first demos along with some live material. The later stuff remains out of print and this version of Rah Jah, is forever lost with the exception of being found on the old vinyl.

Record nerd info:
There was 50 of these pressed on blue vinyl and given away to “punk VIPs”.
There was two pressings of this record. The first had a small 7×7 insert, the second had a 12×12 insert.