Last nite, youngdave and I made the trek out to DeKalb, IL to see Curl Up and Die play. It was a band we had been waiting two years to see again. Young came out from the city and we met up and my place and hit the road for a long drive out to the middle of nowhere, but not before stopping at Potbellys for a fine meal (thanks Dave for the meal!).

Upon arriving at our destination, and walking by a gang of hippies hanging out in front of some storefront, we found the club, simply titled “The House”. It really isn’t a club, it is more like a really big coffee shop that happened to have a stage in the back corner. It has to stand as one of the more unique places I’ve seen a show at. I imagine the very hippies I walked past a block away probably do poetry readings on that same low stage on the other nights, and perhaps were hanging out where they were because they were shunned by the punk rock show. All I do know is if they were “real hippies” then I wouldn’t have seen two of them leave later that evening in a mini-van when we were outside getting some air between bands. Poseurs! 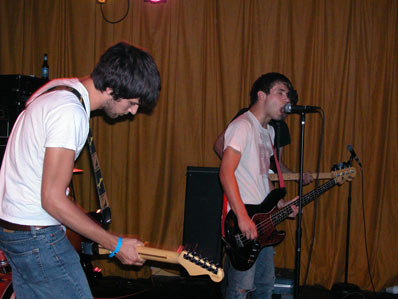 The first band was called Friendly Fire. To put is simply, they were some pretty generic emoish stuff that didn’t appeal to either one of us at all, but a handful of kids there seemed to be digging them. We decided two songs into the set to go outside where it was much cooler. Speaking of emo kids, this place seemed to be packed with them. There was more guys wearing ladies jeans with white belts than I could keep track of, and a good chunk of them also were wearing bandannas. Either in their pockets, or mostly around their necks. Can someone please explain to me what that is all about?! It has to be one of the most retarded “fashion statements” I’ve ever seen, ranking right up there with the huge pants that cover the shoes and drag on the ground. I thought it was because I was without question the oldest person there, and am old enough to have fathered half the crowd, but what’s more is youngdave was likely the second oldest one there, and he too didn’t understand it. 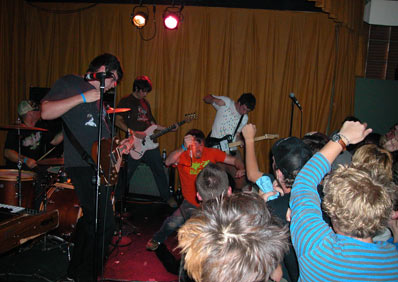 Next up was Bear vs. Shark, another band I had never heard of before. Apparently the crowd there was very familiar with them because they went nuts during their set. I will say I found them to be very entertaining and I happily stayed in the hot club to view their whole set. They were very energetic and were kind of like Hot Water Music with a lot more tempo changes and at times were much faster. Good stuff and had I any money, I’d have likely picked up their album. 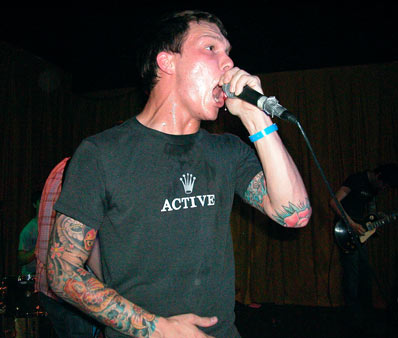 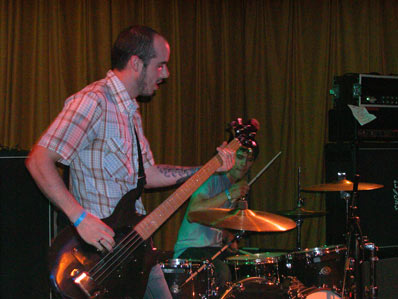 Finally Curl Up and Die took the stage and two years of waiting were finally put to rest. They blasted right into their first song and didn’t look back. They played a few songs of their amazing upcoming album, a couple songs off each EP and something from the first album. The new tracks sounded great live and the familiar tracks were as great as always. I’ll say they played every song I wanted them to with the exception of “You’d Be Cuter If I Shot You in the Face”, which is on the first album. Songs like “Instrumental”, “Damn Girl, That Shit is Deep Like the Ocean” “Nuclear Waste, Bring that Shit On” and “I Hate Almost Every Person I Come in Contact With” sounded amazing and the sound in that weird beatnik club sounded really good. Sadly, only a small percentage of the crowd seemed to be really into it, the rest of them looked like they didn’t know what to make of this powerful force blasting angry yet heart wrenching songs in their faces. If these scarf toting kooks would take the time to read the bands lyrics, they’d find all the emotion they need, delivered in a much more manly and real way. Singer Mike Minnick was all over the place and full of energy and unlike last time we saw them, actually talked a lot between songs. They were well worth the trip and it turns out in two weeks they are playing that same place again! We spoke to Mike for a few minutes after their set to get the skinny on why they’ve been gone for so long and he also told me they’d play my requested song when they come back as long as I remind him before hand. Needless to say, I’m going, and holding him to that! 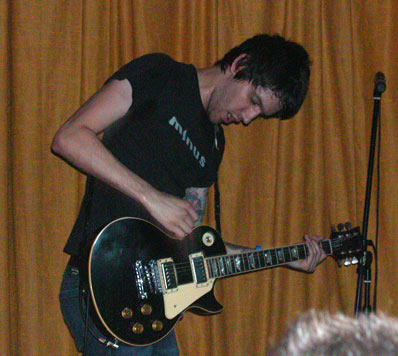 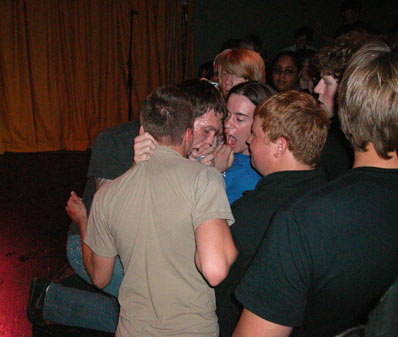 We didn’t bother to stick around for the last band, Fear Before the March of Flames. One of Dave’s friend’s description of them didn’t leave me thinking it would be anything I’d care much about, not to mention it was far better to leave on such a high note having seen one of the best bands around today. 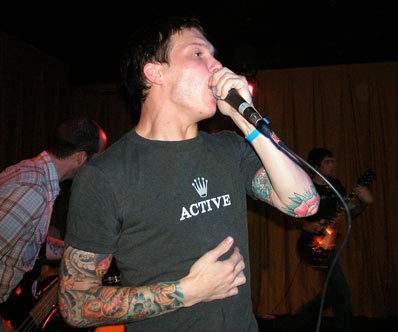 Many thanks to Bob Shedd from Revelation Records for the guest list action as well as to youngdave for the Potbellys. It was a really (and much needed) fun evening out and I very much look forward to seeing them play again in two weeks! If they come through your town, I highly recommend checking them out, as well as their new album when its released late next month (look for a review of that next week).