Curl Up And Die
The One Above All, The End of All That Is 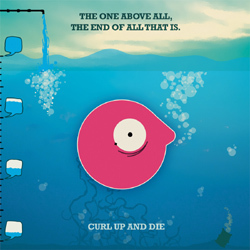 Curl Up And Die
The One Above All, The End of All That Is – CD

A couple years ago, I received a review copy of this band’s last album (and first for Revelation Records) titled Unfortunately We’re Not Robots and it was the first I’d ever heard of them. The packaging and imagery were pretty cool and the song titles really stood out as entertaining. I gave it a spin and my first thoughts were that most songs sounded the same, it would be good in short doses, I bet they are good live, and that the singer must eat a bowl of glass for breakfast every day. I was about ready to dismiss the album as just average for the genre when I got to the song called “You’d Be Cuter If I Shot You in the Face”, upon which I was blown away. It was the only song on that record that didn’t sound like the others, it was really long, had tempo changes and was just amazing. I played that song over and over and thought if this was any indication of the direction they are headed, they are going to be something pretty special. I also particularly enjoyed the crazy song titles and the fact they had little to do with the really good lyrics contained in these songs.

Fast forward to later that year and I go and see them live and they were amazing, and they played some new songs that, while still fast and powerful, contained more emotion and had some nice changes. I couldn’t wait to see them again, and I longed for new recordings. Their next EP, We May be Through With the Past, was released, and the first two songs were the standouts, mixing the old with the new direction perfectly and I damn near burned holes in the CD from it being set to repeat constantly.

At the end of that same year, another EP, But the Past Isn’t Through with Us, came out with similar results. They mixed the hardcore metallic blasts with slower tempo changes and added variations to Mike’s vocals where he would speak or sing softly parts, as well as screaming others with his trademark “throat of glass” vocals. The first song, “Nuclear Waste, Bring That Shit On” was a perfect blend of their new direction while still retaining what brought them to the dance in the first place and again, all I wanted was more, and for them to tour again.

Finally the wait is over and the long awaited full-length is here, and I can tell you it was worth the wait. This album continues the tradition of their branching out their sound, without ignoring the past. While some of the song titles aren’t quite as clever as the past, the songs themselves are top notch and the lyrics are as good as ever. Mike Minnick must be either as much of a miserable bastard as me and has had bad experiences with the ladies, or he can at least really relate to them. There are many subjects and feelings expressed in these lyrics that really hit close to home in my own past experiences.

The album opens with “An Uncomfortable Routine” which shows off a bit of a slower side to the band and is a pretty good example of their new sound. Call it “post-hardcore with personal lyrics” if you wish, or perhaps “real man’s emo” as they aren’t a bunch of whiny sissies wearing ladies clothes and bandannas and can spin a tale of woe behind a whirlwind of power. Just when you think that they have forged ahead without looking back, next comes “Antidepressants Are Depressing” and “Ultra Carb Diet Carpooling Stupid Fucking Life” which proves they haven’t forgotten straight up hardcore, short, fast and to the point.

Its when we get to “Instrumental” where the band really shines. This is easily the standout on the album. Slower than their older material, but still packs a wallop and also features some of my favorite lyrics on the album. “She kisses like cough syrup when I have a cold/We’re not in love, we’re just alone/like a drug company’s overdose/trying to replace our heads with holes. we’re missing days and spending weeks/only passing through looking for company.” The song really shows off the different tempos and emotions the band has been dabbling with in recent past and leaves me really excited with the new direction.

From that point on, the album is nearly perfect. I much prefer the newer sound over the straight-up hardcore songs as it really helps separate the band from the pack. This thing has been on repeat ever since it arrived and I can’t get enough of it. Their live show is not to be missed either, I give both my highest recommendation. There isn’t a lot of new bands that really get me excited, my being a somewhat jaded old punker, but Curl Up and Die are easily in that elite few that do in a big way.

Order the album from Amazon.com