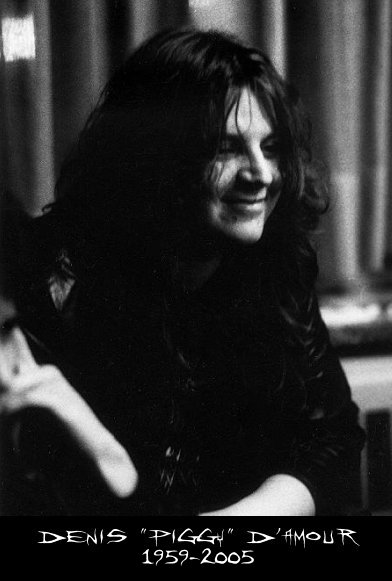 I tell you, the past couple weeks have been cursed with music-related deaths. I am sad to now report that Denis “Piggy” D’Amour from the great Canadian metal band, Voivod, has passed away. Here’s the story that was taken from blabbermouth.net.

VOIVOD Guitarist DENIS ‘PIGGY’ D’AMOUR Dead Of Colon Cancer – Aug. 27, 2005
VOIVOD guitarist Denis “Piggy” D’Amour passed away Friday night (August 26) at approximately 11:45 p.m. due to complications from advanced colon cancer — so advanced that the disease had spread to his liver. D’Amour slipped into a coma Thursday night and died less than 24 hours later in the palliative care unit of a Montreal hospital, surrounded by family and friends. He was 45 years old.

Quebec City newspaper Le Soleil reported yesterday that D’Amour — who was diagnosed with colon cancer earlier in the summer — first entered the hospital for a routine operation, but several complications led his doctors to suspect more problems. Then the grim verdict was revealed: the cancer, already too advanced, was inoperable.

Only two months ago, D’Amour was in the studio working on the 14th album from the Canadian thrash-metal pioneers VOIVOD. More than two dozen tracks are believed to have been demoed for the CD, for which the group recently inked a deal with The End Records. However, the band were forced to put studio work on hold while bassist Jason Newsted (ex-METALLICA) was treated for tendonitis.

In a recent interview with Billboard.com, Newsted spoke about the material slated to appear on the group’s next CD. “It’s the most complete demos I’ve ever been involved in,” he said. “[VOIVOD singer] Snake has already chosen his effects — exact timing of milliseconds for delay. We’ve had a long time to develop the demos, so there’s about 23 or 25 songs that are absolutely listenable right now.”

Newsted was a huge fan of VOIVOD before he was invited to join and he remains a great admirer to this day. “They created something a long, long time ago that may have been emulated many, many times since — but nobody can do it like the original,” he offered.

Prior to his hospitalization, D’Amour laid down guitar tracks for a reunion CD from the legendary AUT’CHOSE, a ’70s band from Montreal. That album is expected to surface next summer.