The return of Bauhaus! 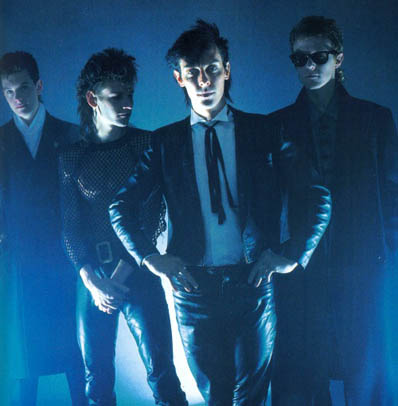 As some of you may know, Bauhaus has once again reformed (yes, the complete original group) and is going on tour. This excites me more than most of you may be aware of. When I found out earlier this year that they were going to play that Coachella show, I was pissed that a full tour wasn’t going to happen and that was just a one-off show, and one that I was unable to attend. Had I the means (ie: the money) I likely wouldn’t have gone as I am not a fan of big festival shows, they are one big cluster-fuck and I find it near impossible to enjoy a show under such circumstances. I resigned myself to being happy with the two shows I got to see in 1998 when they did the Resurrection tour, which were amazing despite that hump, Billy Corgan, coming out on stage the second night and complete soiling their encore of “All We Ever Wanted”. Fuck, I’m still pissed off at that asshole for doing that! At least he was greeted by the crowd by more boos that I’ve ever heard at a live event. That guy sure can draw heel heat!

I didn’t get into Bauhaus when they were still around, I think I first heard of them when I was in high school, which started the year the band called it quits, however I didn’t actually hear their music for many years after that. I was a pretty closed minded punk rocker back then and if it didn’t fit the mold of what I’d read about in MRR or Flipside, often times it just went ignored by me. Although I did warm up to the Cure when I was in high school, thanks to Tracy Munroe loaning me a couple of her tapes and my having a crush on her at the time. That was the exception to the rule though (and some of my other “punker friends” used to make fun of me for liking the Cure but I didn’t give a shit).

My exposure to Bauhaus finally came in 1988. I had recently met a girl who long-time readers might remember my referring to as “the ex-wife”. Her name was Deandra and I really liked her. The first place I ever took her after I somehow tricked her into asking for my number and calling me was a record store. Now countless ladies who have passed through my life will likely tell you tales of how I took them to numerous record stores over the years (sometimes much to their chagrin), and those stories would all be true. In this case, the girl was actually eager to go as she wanted to buy some records. I figured she could be the perfect girl if she wanted to go record shopping with me!

I bought a stack of punk and hardcore records probably the size of my head and she, being a lot more frugal than me (who would blow an entire paycheck at the record store without thinking twice) , only bought a couple records. When I asked her to show me what they were she handed them over and there was this Bauhaus album called In the Flat Field, and it had a naked man on the record. She proclaimed that she wanted that record for a long time and that it was her favorite band. I teased her for buying a pornographic record and we hit the road. I would often tease her about the “naked man record” which is what we both ended up calling that album from then on.

It wasn’t long after that day that we became a real couple, then broke up, then got back together and got serious. During that time, she played her Bauhaus records for me whenever I would give in and let her pick some music to play. It didn’t’ take long before some of the songs started standing out to me and I was starting to really enjoy them. I eventually would let her play them anytime she wanted, and soon started buying Bauhaus records of my own. While I didn’t like every song, they had so many good songs that were both dark and beautiful at the same time and they quickly became, along with The Cure, one of my favorite “non-punk” bands and a group whose songs ended up meaning a lot to me. If you made me pick between a stack of “KBD” records and my Bauhaus records, more than likely the Bauhaus ones would win out, that’s how much I have grown to love the band.

Years later the girl broke my heart and left me for another guy but my love for Bauhaus never waned, despite the fact that even today it sometimes makes me think of her. I listened to them enough to “desensitize” myself from having any bad memories attached to them. Because they had broken up, it was a band I thought I’d never get the opportunity to see, but that changed in 1998, ten years after I first heard them, when they did the aforementioned reunion show. Now they are playing again, two shows here at the Riviera and come hell or high water I’m going, even if I am sick and have to be wheeled in on a stretcher. In a year that has been nothing but one shitty thing after another, I have something that I am really excited about and I can’t wait to go!

Incidentally, the same girl was also responsible for my getting into Skinny Puppy, who to this day remain my favorite band on the planet, a title that they will never lose, but that is a story for another day…