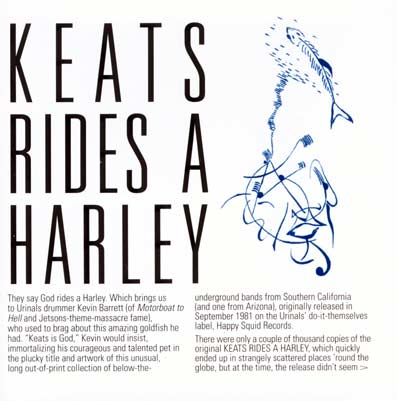 Recently I did a “Selections from the Punk Vault” feature on this record and came to learn that a CD reissue was in the works. I was quite pleased to find out this often overlooked, but great compilation would be once again available to the masses. What I didn’t know until now was that it wasn’t just going to be a straight reissue, but it would be enhanced with bonus tracks!

On top of the tracks that appeared on the original vinyl, each band has an additional track that was recorded at the same sessions that resulted in this compilation! Never before has any of this stuff been heard or released anywhere, and it is pretty amazing that it was saved all these years and still intact. On top of that, this CD also contains the Happy Squid Sampler 7″ compilation tracks as well, bringing the total number of songs on this disc to 23 (up from 9 on the original vinyl).

Musically the bands on here, in most cases, were more in the art-punk category rather than the hardcore that was becoming the standard back in 1981 when this was originally conceived. The Urinals, who’s label Happy Squid Records was responsible for this record, were kind of the centerpiece for this fringe of art-punks who didn’t fit into the Hollywood and beach scenes of punk and hardcore, yet were still like-minded punks doing something unique. There is not a bad song on here and aside from bands like The 100 Flowers, Gun Club and Meat Puppets getting their start on this compilation or it being really early in their career, most of the other bands didn’t have any other records out aside from this one (S Squad is a prime example of this). While the sound is a bit lo-fi, I think it just adds to the raw DIY feeling of the whole record and the bands themselves. The bonus tracks, with perhaps the exception of the Meat Puppets track (which instead of being demented and thrashy like their other early works, was more of a precursor to what they would later become), are all nearly as good as the songs the bands had on the original release.

On top of the fine sound, this CD has perhaps the most comprehensive liner notes I’ve seen on any kind of reissue. On top of a very interesting read about how the compilation and label came to be, there is liner notes by a member of every single band on this disc and made for a long and fascinating read. It is quite obvious this reissue was a labor of love, and a lot of time and care went into it. I’m sure tracking down some of those old band members wasn’t an easy task, something I’m quite familiar with myself.

As a big fan of the original vinyl release, I am quite happy to see that not only was this thing brought back to the public, but done so in such a great way. This CD should be what labels strive for when they reissue their old material.