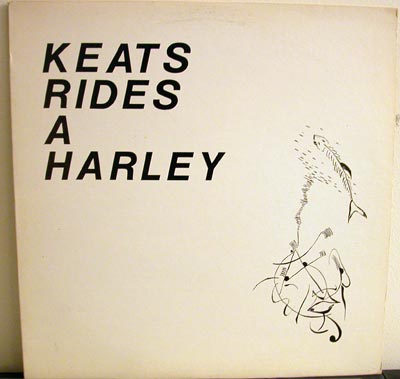 Selections from The Punk Vault [Keats Rides a Harley]

This compilation is something I was aware of for a few years before I ever saw one. The first time I saw it was when I found a copy at a used record shop in CA a long time ago. I am pretty sure the store I got it from doesn’t even exist anymore, as sadly a lot of records stores all across the land have closed their doors for good. I remember being really excited that not only did I find one, but I found it for cheap.

The record was released by Happy Squid Records, which was the label that was run by seminal art-punks, The Urinals. They started the label solely as a vehicle to put out their own records, but after a few 7″s, they decided to branch out, first putting out the Happy Squid Sampler 7″, then doing a couple 7″s by other bands, this album, plus releases by The Leaving Trains and more.

The compilation featured some of the earliest recorded works from the likes of 100 Flowers, Meat Puppets, Gun Club, and The Leaving Trains. It also featured a few bands that until getting this comp, I had never heard of such as Earwigs, Toxic Shock, Tunneltones, Human Hands and S Squad (who is featured here). S Squad, to the best of my knowledge, never put out a record and its a shame because to me they were the real standout on this record.

As to where they are now? Happy Squid records is just a memory, however they have been starting to license their material for CD reissues and have a website. Hopefully someday someone will license this and give it a proper reissue.

Listen to “Scene of the Crime” by S Squad