The Romans – You Only Live Once CD 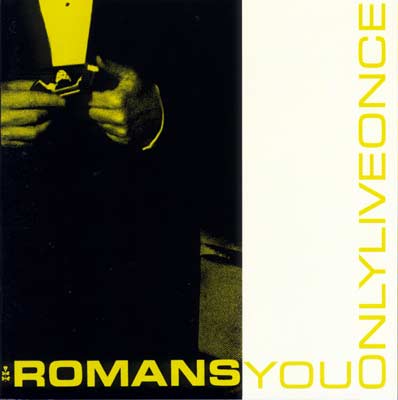 The Romans – You Only Live Once CD
Warning Label Records

I think a wise man once said, “You can’t hear it all”. Or perhaps I just imagined that but regardless, it is true. Despite all my digging and discovering music over the years and going back to unearth gems I missed the first time around, there regularly falls something in my lap that makes me think “how the hell did I miss this?!”. This CD is a prime example of that scenario.

Until this arrived in my mailbox, I never heard of The Romans before. Knowing it came from Warning Label Records, I figured it had to be something old and upon looking at the liner notes, that theory proved correct. The Romans started around 1979 and featured members from Monitor and Human Hands and started as a trio but at times grew as large as a quintet. The reason I never heard of them back when I was a kid was they were not a hardcore band and even a label as broad as punk doesn’t necessarily apply in many cases. They started off as a sort of surf band, but the members had such diverse interests that it came through in their songwriting and at different points on this CD they sound like completely different bands. The core of it is mostly surf instrumentals such as the opening track, “Runway”, that are top notch, but at times they run the gamut from gothic/death rock (“Tuned Out”) to some off-kilter country rock (“Small World” and “Big Neck”), to psychedelic pop (“I’m So Happy”) and to straight up punk (“It’s a Lie”). I can’t think of another band that has covered so much musical ground in such a short career. It really made for an interesting listen and aside from the country tunes, which there are only a couple, I really enjoyed most of this disc, especially the surf tracks.

The CD booklet features some pretty comprehensive liner notes that tell the story of the band. For someone like me who until now had never heard of the band, it does a really good job of educating the reader as to what they were all about. There is also plenty of photos and scans of old flyers included in the booklet which makes for a really nice overall package that does justice to a band that flew under the radar of far too many people, this writer included. Kudos to Warning Label Records for digging up such an obscure artifact and investing their time and money in an effort to bring it to the hands of a few more people.