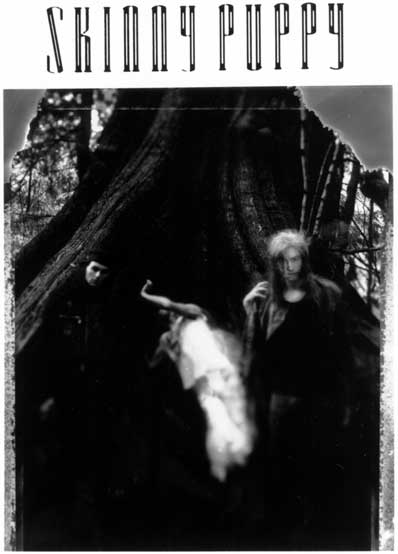 It was 17 years ago today that I saw Skinny Puppy for the first time, and that they became my favorite band on the planet. Many people who have known me for more than 15 minutes will attest to my undying love for the band, but many don’t know the story of how that came to be and why this day was so significant in my life.

In the fall of 1988 I was just shy of turning 19 years old and I was working a really crappy job spot welding for this factory in Westmont, IL. The place was a borderline sweatshop, and I was one of about 3 of the factory workers there who spoke English. This place was so shitty, they didn’t even give you safety goggles unless you really caused a stink, and then they’d chastise you for it. The job was hell, the hours were hell, but the pay was more than I had made at the couple of other jobs I had prior, but in hindsight was rather shitty considering the risks involved.

I was still going to lots of shows at the time, and also was a part of the stage show for my friends’ band, Insane War Tomatoes. It was at their show at The Odyssey in Naperville that I met the girl who would become not only my first true love, but who also would end up introducing me to what became my favorite band. The girl I refer to long-time readers will know of as, “the ex-wife” or DNP. Somehow at this show, I tricked her into asking for my phone number and she actually ended up calling me a few days later. We went record shopping in a story I recanted in my Bauhaus post from a few weeks back. Anyway, I really liked her and it seemed that she felt the same way. In the couple times I saw her before this day, things never got past holding hands though, mainly because I was a really shy and stupid fellow (a trait that sometimes still plagues me to this day).

So about a week before Skinny Puppy were to play the Cabaret Metro, she called me up and asked me if I wanted to go to see them. She said her and her two friends want to go, and they’ll buy my ticket if I can drive us all to the show. Having only known the name of the band at the time, and still being a somewhat closed-minded snobby punk rocker, I politely declined. After we got off the phone, literally like 5 minutes later, this voice goes off in my head saying, “hey stupid, this is a prime opportunity to spend some time with this girl you seem to like so much, call her back now and say yes”. So that’s what I did. I figured even if I didn’t like the show, I’d get to see her and see if things would progress, plus there was a good record store next to the Cabaret Metro at the time and I could always blow that week’s paycheck on records after the show.

So I called her back and told her I’d do it and the plan was set. The day of the show arrives and I go to her house to pick them all up and we made the trek to the city. We got in, and found a good table up in the balcony and made ourselves comfortable. The opening band, whose name escapes me now, had to be one of the worst bands I had ever seen at that point. It was just horrible. I was thinking to myself, “man, is this what I’m in for?”. Then after a wait, Skinny Puppy took the stage. The stage was totally fogged out with smoke from the machines and they had all these weird props set up on stage.

The next 80 minutes completely blew me away. I didn’t say a word and I never once looked away from the stage. I had never seen, or heard, anything like that before in my life. The music was so powerful and intense, and the performance on stage was unlike anything I had seen before. I think my jaw was hanging open the entire time because I was in such awe. When it was over, I felt exhausted in a really good way. The lights came on and DNP turned to me and said, “you didn’t like it did you?”. I turned to her, the first time I looked away from the stage and said, “that was the single greatest thing I have ever seen in my entire life, it was amazing” and I also said, “I can’t believe I almost turned down coming to this!” and she looked not only relieved, but she smiled really big and was glad that I liked it. That smile made her like 100 times more attractive to me as well.

We left the club and went next door to the record store (Pravda Records for those who are curious) where I proceeded to keep my vow of blowing my entire paycheck on records, the first thing I grabbed was the newest Skinny Puppy album at the time, Vivisect VI, which was on a display the store set up in honor of the show. I dropped off DNP’s two friends at their respective homes and then we drove over to the park near her house. We stayed there for quite awhile and she ended up kissing me (something she’d later deny claiming it was I who made the first move) and that night she became my official girlfriend. It truly seemed like the greatest day in my life. I saw the greatest show of my life (still to this day it holds that title) and I got the girl, who seemed at the time to be the girl of my dreams.

I got home so late that night that I figured there was no way I could get up in 3 hours to go to the spot-welding gig, so I had my sister call in sick for me. This wouldn’t have been such a big deal if I hadn’t taken pretty much every single Friday off that summer. The place used to pay us on Thursdays, so I would go cash my check on the way home, shower, then go record shopping and come back with a big stack of new records and an empty wallet every week. I’d be so excited about the pile of vinyl that I’d call in the next day so I could stay home and listen to them all day, plus I hated that job, it was the most depressing job on Earth. They called me back that afternoon and fired me on the phone, not before they called a friend of mine who applied there and offered him my job! I was actually relieved because I hated it so much there, but my mom was pretty pissed off about it. DNP felt really bad about her being responsible for me losing a job, but I told her not to worry, it was well worth it.

I spent that day playing my new Skinny Puppy album and I loved it, and in true MXV fashion, I had to have more, all of it, completion. I spent the next few weeks tracking down every record of theirs there was and buying them all. It was all I listened to for weeks on end. The obsession didn’t end there though, I soon was after any live video/audio bootleg I could get my hands on, t-shirts, photos, you name it, I had to have everything. At some point in my life, I had enough Skinny Puppy shirts to be able to wear a different one every day for almost two weeks! It was all I looked for at record conventions, record stores and mailorder places. I started trading tapes with people to get more of them and swapping videos. DNP thought she created a monster and at times I’m sure she regretting taking me there because she got so sick of hearing about Skinny Puppy all the time. Some of the friendships I made back then in my endless hunting for tapes still remain today, namely my friends Todd (from IN) and Dennis (from MI).

As the years progressed, I saw the band every chance I got, even traveling to nearby states to see more shows (I saw 2 on the Too Dark Park tour and 6 on the Last Rights tour), and I even interviewed Dwayne Goettel for my fanzine in 1989 when Rabies was released, which was a really big deal to me at the time, getting to interview someone from my favorite band. I had never been so nervous about doing an interview and he turned out to be one of the nicest band people I have ever spoken to. The band also opened me up to a whole new world of music I had ignored up until that point, and while I was getting disillusioned with how shitty punk rock became with everyone either going metal or all those shitty youth-crew hardcore bands, I was getting way into this industrial and Wax Trax scene, which to me at the time was as exciting and new as punk rock was to me at the first half of that decade.

Five years or so after this fateful day, DNP, who I had planned on marrying (hence the title of “ex-wife”) left me for another guy whom she married pretty close to the exact date we had been discussing for our wedding. It took a lot of desensitizing back then for me to be able to listen to Skinny Puppy and not think about her all the time, but it worked. When I listen to them I will almost always just be so immersed in the great sounds that I don’t think of much else, except perhaps of the now 16 times I’ve seen them and how those were the 16 best shows I’ve ever seen.

So now you know how my life changed on this day 17 years ago and when I see this date on a calender, I get a little nostalgic and even have a little smile. I found a new band, a new genre of music (new to me anyway, it had been around a few years), learned how to love (and later how to have my heart broken), and all of that set me on a course that brought good friendships and a change of life (had the girl not left, I’d never have ended up in the video game industry) that has stuck with me all these years.