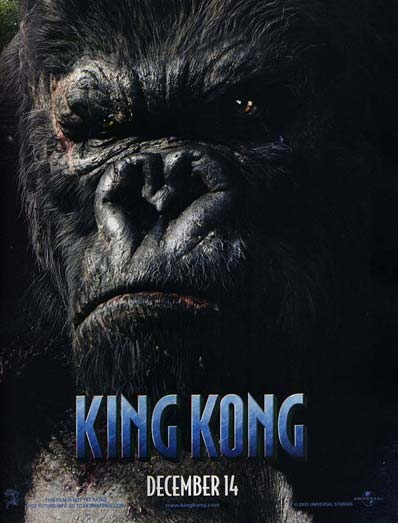 Wednesday my Uncle took me to see King Kong. It was the opening day and we caught a show around 11:30am. For an opening day, I was surprised at how empty the theatre was, not just for our show, but in general. Sure it was a Wednesday during a time when most people are at work or school, but I still expected it to be more crowded. I think there was about 10 people in our theatre, which was nice for the fact that it made for less distractions and no one was making noise, but for the box office, that is pretty damn low and I’m sure the movie cost a fortune to produce, especially with all the CGI work on Kong, which was really impressive.

Typically I am against remakes of old films, but I will say that I gave this one a chance because of Peter Jackson doing it, and my being a huge fan of the Lord of the Rings movies he did. I was happy to say that it was well worth giving a chance to. My only complaint was the movie was a little on the long side (it clocks in at around two and a half hours), they could have trimmed down some scenes pretty easily I think to make it a more bladder-friendly length. At no point, however, was I bored and the effects in the movie were mostly top notch. I really like the fact that they kept the old time setting and didn’t go modern with the story. I thought Jack Black did a great job in his role, as did whoever that woman was who played the “love interest”.

Another thing that was done to perfection was the sense of emotion and how the movie will really get to you in the scenes with Kong and the woman, and I will also say that there were parts of the film that amazed me at just how sad it made me. That is good storytelling and good film making, and Peter Jackson did an upstanding job with his spin on this classic movie. The bottom line is it is a movie well worth checking out, and when I’m back in the market of buying DVDs someday, it’s going on the “to buy” list for sure. Many thanks to my Uncle for his generosity in treating for me to go and see it.