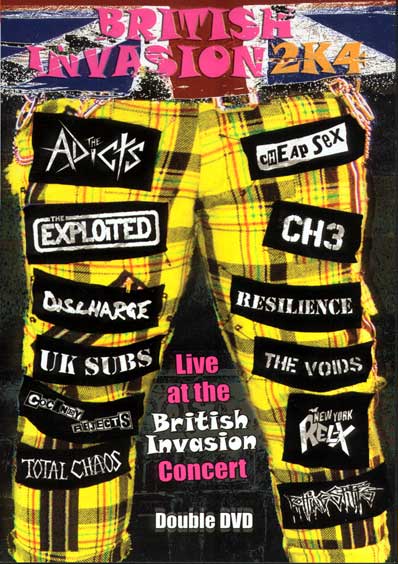 British Invasion 2k4 was a huge punk rock show that happened in November of 2004 in front of a packed crowd of 4000 people somewhere out in California. The main draw of course was the handful of old UK punk bands from the early days that are still playing in some form or another. Having some of these bands together on the same bill must have been a young punk kid’s dream come true.

The DVD is split into two discs. The first one is the main event, and has all big name UK bands. You get The Adicts, The Exploited, UK Subs, Cockney Rejects and Discharge. The second disc has some new and a couple older bands mostly from the USA and features CH3, Total Chaos, Resilience, NY Relx, Cheap Sex, The Voids, and Rotting Stiffs. Each band feature has somewhere between three and seven songs from the show, plus some interview footage where you get to learn about the band, or just hear what was on their mind at the particular moment. The live/interview footage was woven together quite well and gives the disc more of a documentary feel as opposed to just a live concert DVD.

On disc one you have The Adicts, which are not only easily the biggest draw on here, but the best band of the bunch. This gives you a great taste of their most excellent live show that really shouldn’t be missed. Having recently witnessed their live show a few months ago, it was cool to see some footage to remind me just how much fun they are live. The Exploited deliver five live songs and I always felt they were pretty much the worst UK punk band of all time, and seeing them on here only seemed to reinforce that opinion. There is some interview footage with Wattie as well and you’d be hard pressed to decipher what he is mumbling about. They should have included subtitles so you could make out what he was saying! UK Subs performance was quite entertaining, and I saw them that same year and it was pretty close to what I saw, which was a good time. Discharge deliver seven songs and you might want to note that it is not the entire original band. They had a different singer among other members, only two being original. I saw them that year too and they weren’t bad. Last but not least, Cockney Rejects, who I never heard much by over the years but it was pretty good.

Disc two has CH3, who I was very glad to see given some exposure as they are a long time band from the early days, and one that has gone sadly under-appreciated by many of today’s young punks. Total Chaos are the next in line in terms of how long they’ve been a band and they were entertaining. The rest of the bands was pretty much the first I’ve heard of any of them and most of them were pretty entertaining and a rather diverse lineup of musical styles.

The whole thing was shot on seven cameras and the audio was a 24 track digital recording. It looks and sounds great. The editing was pretty good, giving you a nice glimpse of all the action and was surprisingly lean on crowd shots. The video was full frame and the sound was straight stereo. The menus were pretty clever; it is an item of clothing with patches on it representing each band that you can choose to watch individually, or there is a “play all” choice to see the entire thing. The one major fault I found in the packaging and presentation is that while there is a track list for disc one on the back of the keepcase, there isn’t one for disc two anywhere! Unless you are familiar with the bands material, you are not going to know the names of the songs, so if you liked a song and fancied buying one of the band’s records, you are out of luck as to knowing what the song is. It would have been a wise investment of someone’s time to have put the song titles on screen during the performances.

As a bonus on the second disc, there is an interview with CH3, some of which was used in their portion of the disc. It was very interesting and again, I was quite happy to see them get some well-deserved exposure on here that the other bands on disc two didn’t get. The total time for both discs is about 195 minutes, so there is definitely enough to keep you busy for the better part of an afternoon. With the upstanding visual/audio quality and pretty good lineup, I’ll say that this gets a thumbs up and is worth a view or two.