Last night, thanks to the kindness of Youngdave and Missy giving me a ticket to go, I went to WWE Raw at the Allstate Arena. After enjoying some very slow service at a place called Ram for a meal, we parked in the Matt C. econo-lot (ie: in front of his house a couple blocks away, thus saving us having to pay to park at the arena and not having to sit in an hour long line to get out of said lot after the show) and head over to the arena. 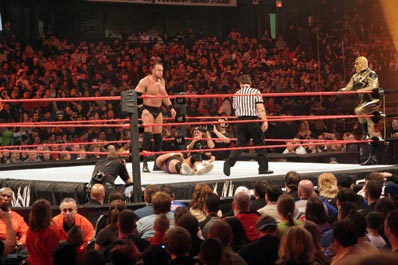 Snitsky and Goldust teaming up

While their lack of creative writing has left the product rather stale lately, they sure don’t seem to have trouble in my city getting people to part with their cash. The lines for merch were huge and the show was sold out. We got there right around the time the doors opened and found our seats and got ready for the pre-show of dark matches or internet only matches. The first of which was a tag match with some new guys called The Highlanders. They were in full on Scottish garb ala Mel Gibson in Braveheart but without the blue face. They were announced as weighing in at 34 stone, which I popped for because it was funny. The match itself was nothing special but at least it is a tag team and it left me with some fleeting hope that they might actually make an effort to build up the tag division into something meaningful again, but I’m sure they won’t. Note to WWE – I can probably write circles around your current crop of “entertainment writers” that have no head for wrestling and I’d happily accept a job writing strictly for the long-ignored tag division. I can even guaran-damn-tee a return on your investment of my salary. 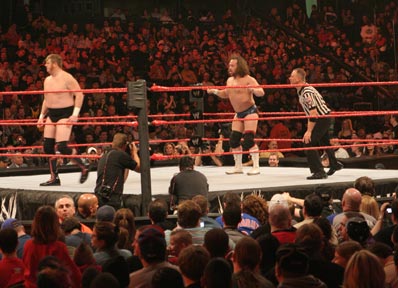 There were a few other matches featuring the likes of Snitsky and Goldust as a tag team fighting a couple local workers. Eugene lost to Trevor Murdoch, Rene Dupree and Rob Conway fought a couple other people who I already forgot. 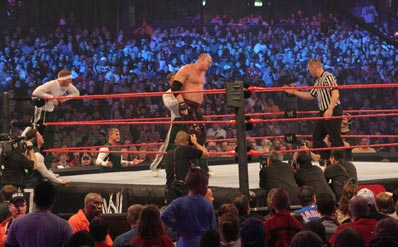 Spirit Squad about to take the tag titles

When Raw started, it opened with John Cena coming out to mostly a round of boos talking about his win the previous night over HHH. Then HHH came out to demand a rematch, and then Edge came out stating he was owed a title shot due to his big win at mania. This led to a great exchange of insults between HHH and Edge while Cena sat back and watched. It eventually led to them announcing a handicap match of Edge/HHH vs. Cena for the main event of the show. 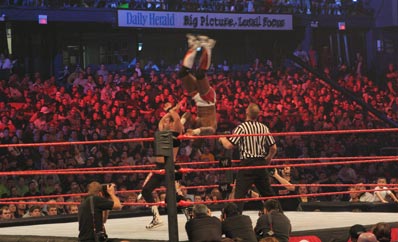 There was a tag match were two of the Spirit Squad took the titles off of Kane and Big Show thanks to five on one interference. I pretty much figured when they all came out what the outcome would be. Again I’d like to think this could lead to some interesting things for the tag division but I’m sure nothing will come of it. I mean you could do the old Freebird gimmick where you don’t know what two of the Spirit Squad you are going to have to face for the titles and make some compelling feuds with other people waning in the midcard or lower and give them something to do, but I digress. 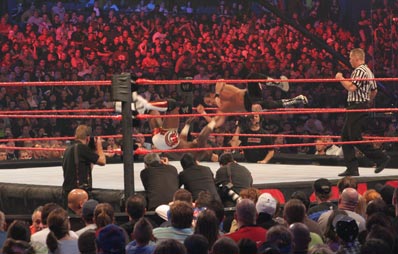 After that, it may have been more than an hour before we got another wrestling match. There was promo after promo until eventually we got a ladies tag-match where Mickie James came out dressed as Trish, which was kind of funny. Chavo Guerrero dedicated his match with Shelton Benjamin for the IC strap to his family and said he wouldn’t let them down, which he ended up doing as he lost. He then cried and said he is quitting. This whole thing where everyone is talking to the spirit of Eddie Guerrero really makes me uncomfortable, and is getting really old. It was a shame the match was so short because I think the two worked well together and would put on a really great match given a longer amount of time to work in. 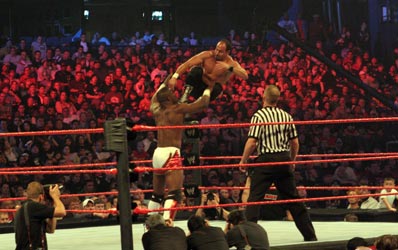 There was a debut of a new Samoan/islander type wrestler complete with a Cuban manager which is a total throwback to the 1980s. I didn’t catch his name as it was hard to hear the manager talking sometimes. He attacked Ric Flair and laid him out with some sort of Angle Slam turned into a neckbreaker. Youngdave summed it up best about the new debut in this picture… 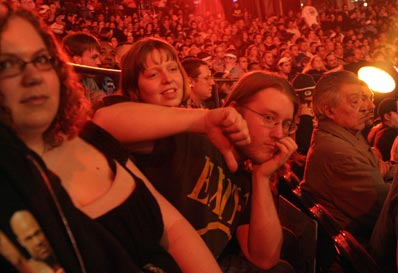 After that came the main event. HHH sat on the turnbuckle and made Edge do all the work for awhile. Then after Edge speared HHH when he tried to get involved (inadvertently as Cena dodged it), HHH helped Cena take him out, then turned on Cena and gave him the Pedigree to win the match, thus squashing two people in a matter of about 3 minutes and that ended the show. 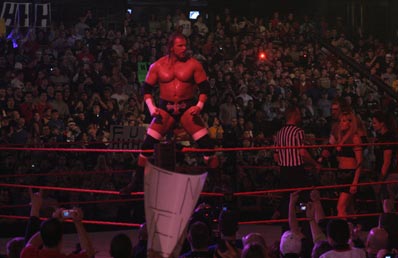 Overall, for being the “fresh start” Raw that is supposed to follow Wrestlemania, the show was a pretty big let down. It had no “big” feel to it, nothing exciting or new was really started, and it felt like just another sub-par episode of Raw. It was a fun time out, and just being at a wrestling show is usually a good time, but the product itself was a bit of a let-down coming off of what turned out to be a really entertaining Wrestlemania overall – despite it having the absolute worst build-up in WWE history.

We had good seats too, but my pictures would have really benefit from having a much zoomier zoom lens. That is now on my short list of things to get once finances are in order. Thanks again to Youngdave and Missy for the ticket, once again showing me how awesome my friends are and how lucky I am to have such good ones.