And what about you MXV?

Its been ages since I wrote about myself on this site. Its kind of funny in a way that this blog started out being solely about myself, then evolved into this whole other thing where people classify it as a “mp3 blog” or a “music blog”. I never thought the former was in any way accurate. I mean sure, the “selections from the vault” allow you to download a mp3 track but as you regular readers can attest to, I sort of strive for quality over quantity and you get one of them whenever I have something of substance to post. While it is impossible to get a band’s involvement on every single one I do, I try like hell to make that happen because I never started doing those as a vehicle for people to get free music so much as I wanted it to be a document of some great old records and bands that I think shouldn’t be forgotten. It seems since I started doing that, there’s been a whole slew of mp3 blogs popping up lately, and people are just trolling soulseek to download old punk records, find a picture of the cover and slap three sentences together and start a blog and post the entire record for someone to download. I’m not pointing the finger at anyone specific, but it seems like a new one is popping up every few weeks and after awhile they all start to seem similar and I strive to be something different and unique. So anyway, if a couple weeks pass and there isn’t a new “selections from the vault” posted, it is because I either am waiting on some band member to get me some info for one I’m working on, or aren’t inspired enough to compose an interesting enough story to bother doing one at the moment. In those off weeks, you’ll always have the LFCM radio show for your old punk fix.

In other news, I took a contract job that started today. It isn’t near what I’d ideally like to be doing (which is what I used to be doing), but at least it will keep the lights on for a couple months or however long it ends up lasting. This means in the short term you likely won’t have to listen to my bitching about being broke all the time and it means if you are my friend, in the next couple weeks you won’t have to worry about my having to sponge off you if we go out during this duration. Of course since it isn’t a permanent gig, I’m not back in the black and back to buying all kinds of cool shit, or even records, as I’m going to have to save the money to keep me going again when it ends, but at least I’ll soon be able to go out to eat sometimes with friends and actually pay my own way. At least I assume I will, I don’t know what I’m making yet at this thing!

I was seeing a new lady for a few months, but she seems to have turned into a bit of a kook so that’s done. There is more to the story as I had some history with said girl and thus pretty much expected it not to last, but whatever, it’s not that big of a deal as it was in no way serious. Even more recently I sort of inadvertently told another girl I had a crush on her but sadly the feeling wasn’t mutual. That one was actually more sad cuz the girl is kickass in like every good way and insanely pretty. Ah well, such is my luck.

I’ve been messing around a little with my camera. There haven’t been many shows for me to go to so I have to take pictures of other things and hopefully get better at using it. Here’s a couple random things I took pictures of. 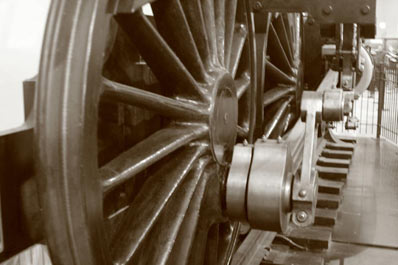 This was taken at the Museum of Science and Industry. I just thought it looked kind of neat. 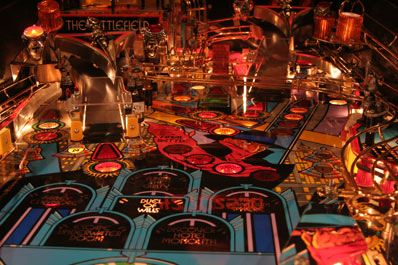 This is a picture of the playfield of my Shadow pinball machine while it was lit up. I took a couple photos of the game for some people on RGP to see because mine is a prototype game. I was experimenting with some different angles to see what the results would be and I ended up thinking this looked cool, though it looked much cooler full size.

Feel free to let me know if they suck. I’d like to someday soon get a fisheye lens (or lens attachment as they are inexpensive) and a good telephoto zoom lens for the next time I go to a wrestling show. Soon warm weather will be here and I can resume going on walks and I’ll start taking my camera with me and look for things to shoot. I also look forward to getting back to my nightly bike rides this summer.

And last but not least I am flooded with Mystic Records projects all of a sudden. He’s just stacking up the releases one after another. I also started working on pinball machines again down in my basement starting with the long overdue playfield swap on my Doctor Who, and continuing with doing a shop job on a Hurricane for a paying customer. I may be taking on more of that stuff and if you live in the Chicago area and have or know someone with a WPC/WPC95 era pinball machine that needs a good shop job and some repairs, point them in my direction please. Anyone who has been to Combustion Manor and has seen my own machines can attest to the fact I do good work.

OK, I’ll now return you to your regularly scheduled punk rock and reviews.