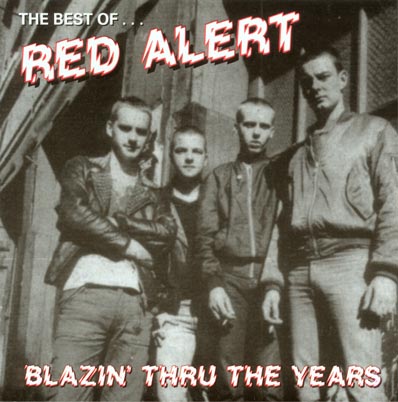 UK punk was never my specialty. I have said it before and I’ll say it again, with some exceptions, I didn’t give a lot of UK bands a fair shake as I was always more interested in the bands from my own country. It wasn’t that the bands from the UK are bad, in fact it is quite the opposite, there is a lot of great UK punk, but I guess back then on a limited budget, you had to narrow your collecting focus and because of that, I missed out on some great bands back then from across the ocean. Like the Blitz review I wrote earlier, Red Alert was a band I was familiar with mostly by name, and I never ended up buying any of their records in my younger years.

Red Alert formed around 1979 and has been playing ever since. In their long history they’ve put out quite a few records and as I understand it, some of the early ones are hard to come by and out of print. They already had done a greatest hits collection on Captain Oi in recent times so what was left to fill another one with you ask? Well there are some old favorites and some newer tracks and some alternate versions on here so to the best of my knowledge, there is little overlap of the same versions of songs at the very least.

When you dissect it, it turns out many of the older songs on this disc were either live or re-recorded, which if you are only into the old stuff may come as a bit of a bummer. That aside, the songs still sound good even in their newer recorded versions. Musically they are very much 80s style UK punk which is hard edged yet melodic enough to get you singing along. There are 20 tracks total on here and really it’s a pretty good listen from start to finish. There is some liner notes included inside that state the origin of all the recordings and how they came to put this collection together, which is a major improvement over the aforementioned Blitz collection which had no information whatsoever.

New fans may be better suited with the Captain Oi collection to get their fix of the real old stuff from Red Alert, but those looking for some more, or the more die-hard fans would likely find this disc worthy of their attention, especially if they may be missing a few Red Alert records in their collection.