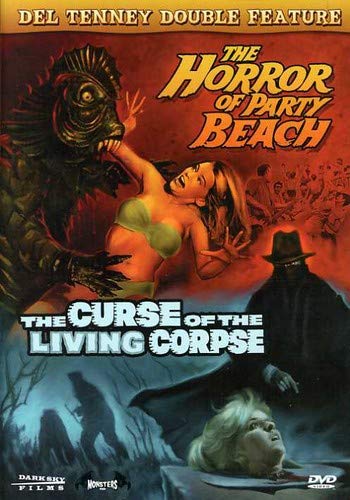 This DVD is a double feature of old Del Tenney films from 1963. To be honest I’ve never heard of the man until I received this DVD to review, but it turns out he is some kind of classic drive in b-movie filmmaker.

The Horror of Party Beach tells the story that some people dump canisters of toxic waste into the ocean to dispose of them. One of the canisters breaks open at the bottom on the sea and the toxic waste spills out onto a human skull that just so happens to be resting on the sea floor. The mixture of skull, waste, and ocean elements creates a monster that looks like the retarded cousin of the Creature from the Black Lagoon. This monstrosity starts attacking beach goers, and as it kills people, it seems to multiply! Soon a small army of these creatures are killing girls beach-goers and girls having a slumber parties all over town. Some scientists find out about it and set out to figure out a way to kill the monsters because conventional methods aren’t doing the job. Its a pretty campy but entertaining drive-in suitable movie.

The Curse of the Living Corpse is about a rich man who dies and leaves explicit instructions about how things should be handled post-mortem with his body and estate. His family are all given specific instructions and told if these things are not followed, the old man will come back from his tomb and kill them one by one, using the methods they fear most to do the deed. As you can guess, greed starts to get the better of his surviving family and they immediately start breaking the agreement. One by one they start dying. But can the old rich guy really have the power to come back from the grave? This movie was a little slower paced than the other film on this disc and I didn’t enjoy it as much, but it still was a decent old time fright flick.

Each movie is around 90 minutes long. Both are in black and white and are in anamorphic widescreen. The image quality is very good, though dark in some places, especially in The Horror of Party Beach, but I suspect that was how it was shot. The picture quality is quite sharp and in general has pretty good contrast. The sound for both is the original mono mix and aside from a little bit of hiss, sounds quite good. The bonus material consists of audio commentary for both movies by Del Tenney and an interview with him about both movies. The theatrical trailers are also included.

Fans of campy horror flicks would find this disc a pretty decent way to kill (no pun intended) a few hours.