Punk ’77 A book by James Stark 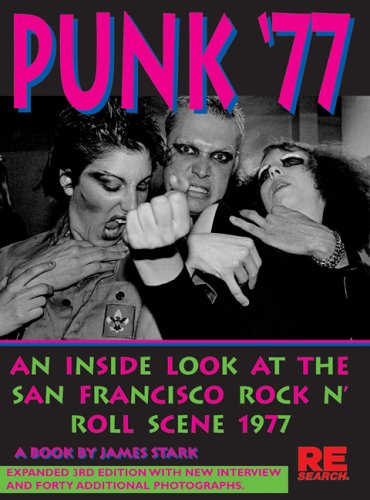 Punk ’77 is a look back at the first wave of the San Francisco punk rock scene. It tells the story through the voices of some people involved in interviews that were done about a decade ago. Members of the Nuns, Dils, Avengers, Crime, and others share their stories of how they became bands, how their little scene opened the door for punk rock in that city, how they found places to play, etc. On top of the great stories and history, there are tons of great photos from back then of the bands and people involved. The stories are put together chronologically starting in 1976 before there was punk rock in the city, and then as it starts to unfold, it covers the year of 1977 where all the action happened and SF punk was born, and ends as 1978 unfolds and brings the change of hardcore starting to emerge and the crowds and scene and bands changing.

The book is put together and reads very similar to Please Kill Me : The Uncensored Oral History of Punk and We Got the Neutron Bomb : The Untold Story of L.A. Punk, which are books that cover the early New York and Los Angeles scenes respectively. I really enjoy this approach as it reads in a way that is similar to watching a documentary on TV with the different voices each chiming in on the topic and time period being covered in a particular chapter or segment. The people interviewed for this book all had very vivid memories of those times so it would seem that neither age nor substance abuse had taken its toll on the memories of these folks. For a person such as myself who is a fan of many of these bands but knew very little about the history of San Francisco punk due to a lack of resources, this book was a welcome history lesson and I came out of it knowing a lot more of the origins of this scene that produced so many bands I still love to this day, and I have an even greater appreciation of it.

The book is about 120 pages long with a lot of pictures. It is a fairly quick read, but the content is quite solid and very interesting from start to finish. This is the “expanded third edition” that features an extra interview at the end as well as some additional photos. One thing I noticed (and it is noted in the introduction) is that despite the fact this book has been reprinted and updated, the original errors remain intact. Instead of correcting them on the individual pages, all the errors and corrections are listed at the end of the book. I would have preferred they just change them in the main book instead of how they did it, but it didn’t detract from my enjoyment of the book and certainly doesn’t diminish the facts presented inside. The photos are are superb quality, James Stark must have had some pretty sweet equipment back then, they are all in black and white and quite striking. There are plenty of photos of Crime, The Nuns, and The Avengers that until receiving this book, I had never seen before.

For anyone who is interested in punk rock history, this book is a mandatory read. I can think of no other book that covers the SF scene at all, let alone how it began. Its a perfect addition to your punk library along with the aforementioned books about New York and Los Angeles and will get revisited quite often by this reader.