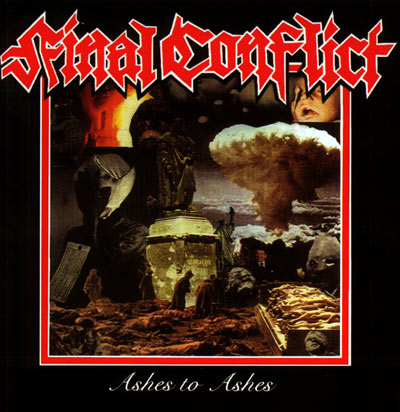 Final Conflict was a hardcore band from CA who started in 1983 but didn’t put out this, their first album, until 1987 on Pushead’s label, Pusmort Records. It wasn’t in print for more than a year or two before it vanished. It was reissued once in the 1990s on CD by Relapse Records, then again by Cargo/Tacklebox and eventually went out of print again. Now for the third time, it is once again available on CD.

The music is pretty straight-forward mid 80’s hardcore with surprisingly very little metal influence considering the time period this was based in. They lyrics were fairly political in nature and pretty well thought out and certainly appealed to the general feeling of punks in that decade and in many ways are still as pertinent 19 years after they were first presented.

The packaging contains lyrics to the entire album, a little message from the band and a small collage of photos on the last page. On top of the original album, this CD contains bonus tracks from the band’s 1984 demo doing covers of “Love Song” by The Damned and “Warhead” by UK Subs. I wish they would have included the band’s original material from said demo if any existed, but still it was better than no bonus material. Overall a pretty wise purchase for fans of 1980s hardcore and its nice to see it preserved once again in a nice package.