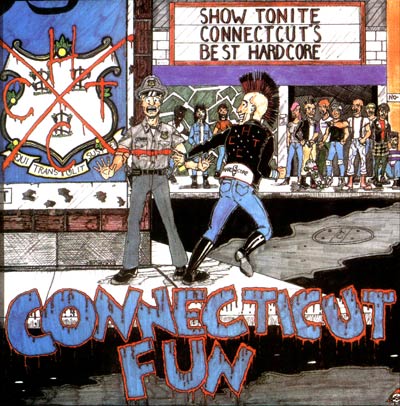 In 1985, a little CT label called Incas Records put together a compilation of CT bands who were hanging out and playing at the Anthrax club out there. The whole thing was financed by all the bands and some donations and the entire album was recorded and mixed over the course of one weekend at a local studio. It was a somewhat overlooked but really good compilation that did a good job documenting that scene at the time. The record has been out of print for 20 years now and it looked like it was going to be one of those things that only the most obsessive of record collectors would have while the rest of the world would either not have heard of it, or be living without the music contained in those original grooves. Now two decades later, Incas Records as been resurrected and this compilation reissued on a CD for the world to hear what they may have missed, with bonus track to boot!

The compilation features either the first or the only recordings by Fatal Vision, End Product, Contraband, Vatican Commandos, Seizure, Bad Attitude, CIA, Rude Awakening, Lost Generation, No Milk on Tuesday, Youth of Today, 76% Uncertain, and Punkestra (a band that was made up of all the bands on this compilation). The music was all hardcore of various speeds that just pre-dated the hardcore turning metal trend that happened around that time. As a bonus this CD also contains the lone 7″s by No Milk on Tuesday and Rude Awakening, which if it weren’t for their inclusion in this disc would have been lost forever seeing as neither band recorded anything else outside those singles and this comp.

As much as it pains me to say so, I think this disc actually sounds better than my original vinyl. It was recently remastered and a great job was done on it. The booklet folds out poster size and contains some really nice liner notes from some of the various people involved with the original release as well as this reissue, plus it contains the lyrics and band information for every song on the CD! It was obvious by the nice job that the people behind this disc really had an emotional attachment to it and put a lot of care and time into making it be as nice of a package as it can be.

It’s really nice to see not only an old punk label resurrected, but some old and somewhat obscure recordings that meant so much to old punk such as myself be made available for a fair price so people other than those with lots of disposable money to buy old vinyl on ebay can enjoy this fine old hardcore punk that still stands the test of time and sounds as good to these ears now as they did when I first purchased it in my teenage years! I look forward to seeing what else the new Inca Records has up their sleeves!