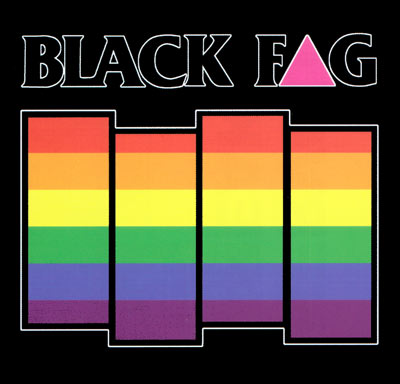 Black Fag, as you may have guessed, play renditions of classic Black Flag tunes but instead of just straight up covers they totally gay them up! The singer sounds like an even more flamboyant Fred Schneider of the B-52s and the lyrics will often be altered to make them more homo-friendly. It truly is hysterical! The band really have those songs down to a science and play them tight, and likely could play them better than the old members of Black Flag at this point! Unless you are such a homophobe or truly lack a sense of humor, there is no way you are not going to have fun listening to this album. In fact, this CD is going to be required playing at the next party I have!

The disc features ten songs, all of them are Black Flag tunes from the early hardcore years. Songs like “TV Party” are especially funny during the part where they call out TV shows because off all the truly gay shows they yell out. The packaging is very true to the look of old Black Flag records, but of course with their own twist on them. There are gay parodies for Everything Went Black, Slip it In and Jealous Again inside the booklet and all of them had me laughing out loud.

Any Black Flag fan with a sense of humor, or even just someone who is somewhat familiar with the songs would be wise to pick up this disc, and especially going to see Black Fag play. It’s guaranteed to put a smile on your face and have you laughing out loud, plus ten percent of the proceeds go to various charities so its also for a good cause.

Order the CD from interpunk