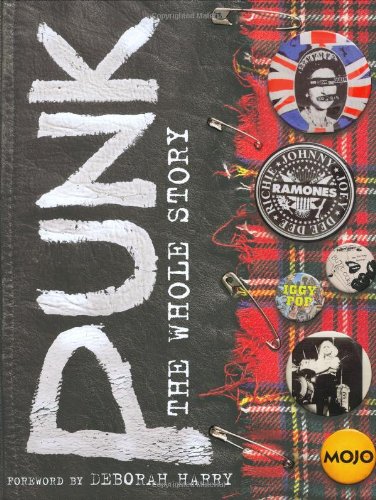 It seems that now, some 30 years after a new style of music that came to be known as punk rock started, it has become a much more accepted (and co-opted) style of music and as a result there has been a lot of books and movies starting to come out documenting its past. Punk: The Whole Story is a very large hardcover book put out in association with Mojo Magazine that attempts to tell the story about how punk started and where it ended up.

Each Chapter of the book covers a specific time frame in punk’s lineage, and each chapter is divided up into different sections; each covering a specific band or person. The individual sections are very well written and seemingly well researched. You will learn how The Sex Pistols, Clash, Ramones, Damned, Television, and more discovered punk rock, met each other, and how they came to form bands. At some points in the various chapters, you get a break from the reading to have a few sections of some amazing photographs from the old days of punk rock. There is a lot of photos in the reading sections too of course and the layouts are generally really well done.

Reading through the book, it really does a good job educating you on the early days of UK punk and the New York scene. I learned a lot about bands like The Ramones and The Clash that I never knew before and even being as huge of a Sex Pistols fan as I am, I learned a lot about their history too that I didn’t already know. I know that the UK and NYC scenes have been covered a lot in other places but I believe there were things is this book that I didn’t read in other books. I was pretty captivated by it and found it hard to put down at times because I just wanted to keep reading and looking at more of the pictures.

For as many things as the book got right though, it isn’t without its flaws. For something touting itself as “the whole story” with the exception of a section on Black Flag, they pretty much completely ignore the hardcore punk scene of the 1980s. The book goes from doing a good job of the 1970s scene to skipping ahead to Green Day and closing with covering some punk deaths and a “what’s next” feature. It’s like they didn’t even know the hardcore scene existed! The other major flaw is in their listing of the “77 best punk records”. It starts off fine but when you list The Germs – Germicide LP as one instead of the (GI) album, that is just obvious that whoever slapped it together didn’t read heavily enough at whatever other sources they were using to pick these from that they picked the wrong record. Worse than that though, it starts off all well and good with some very accurate picks, but then they’ll throw some shit in there like The Hives. Excuse me?! You’ll proclaim that to be one of the 77 best “punk” records but Social Distortion’s Mommy’s Little Monster gets no mention?! While making a list of the best records is subjective and will vary from person to person, it is picking something like The Hives and The Libertines that make it obvious that some mainstream rock mag was responsible for this and not some true punk rock fan. In a book that limited its scope to mostly the 1970s and some of the 1980s, I wouldn’t be adding records to the list that were made recently, it just doesn’t fit.

One more glaring omission is the lack of coverage for the California scenes. There was almost nothing mentioned about the thriving Southern California punk scene that spawned so many great and influential bands, and no coverage of the Northern California scene either. Again, it makes the title of this book a little misleading.

Shortcomings aside, Punk The Whole Story did an admirable job on what they did choose to cover and the book was a fascinating read from cover to cover. You won’t breeze through this book quickly, there is a lot to read (and the print is small) and a lot to look at. When you do finish it, the attractive presentation and the wonderful photos contained inside would make a nice addition to your punk coffee table and is worth your time to check out.