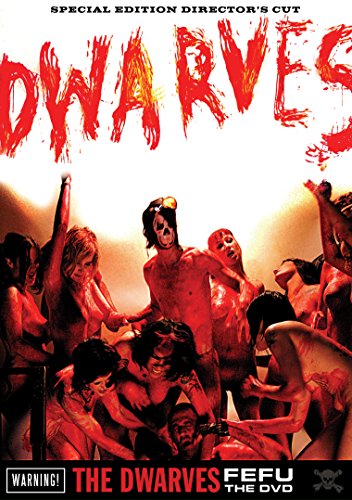 The Dwarves have become somewhat legendary over the years with their short chaotic live sets and their catchy brand of raw and raunchy punk rock. Also since their first Sub Pop album, they have also been associated with something else; naked ladies. It came as no surprise that the worlds of The Dwarves and Suicide Girls would collide at some point and the two would join forces to make a music video for the song “FEFU” (which stands for Fuck, Eat and Fuck You Up).

The main feature on this DVD is the music video for “FEFU”. The song just so happens to be one of the catchiest Dwarves songs I’ve ever heard, it also happens to be one of the longest I’ve heard (at over two and a half minutes). There is two versions on here; the dirty one and the clean one. The clean one has less nudity and the song itself is edited to be radio-safe. Why they bothered to clean up the song to make it radio friendly but still have nudity on it, thus making in TV-unsafe is a mystery to me, but you get your choice. Of course you’re going to want the dirty one for not only the untainted version of the song, but for the more gratuitous nudity of some fine looking ladies from Suicide Girls.

Aside from the two versions of the video, there is a lengthy feature on the making of the video. While the video itself is only three minutes, the making of is 41 minutes long. There is an “early years” segment which features one music video and three live clips from early in the band’s career. The live clips are one camera fan-cam type of deals with decent sound quality. The “live footage” feature has clips from a handful of tours over the years, mostly from bootleg videos of various quality, most of which is pretty rough. There is two interview features; one from 1992 where the band are pretty wasted and didn’t really want to be bothered taking it very seriously and one from 2005 where they actually seemed to give a shit. Lastly there is an “extras” feature a couple of various Dwarves related clips.

If you are a hardcore Dwarves fan, you’ll likely want this. As a more casual fan who hasn’t picked up their last half a dozen albums, I still found it quite entertaining and a pretty good way to see what they’ve been up to since I last checked them out. The overall presentation of the DVD was well done.