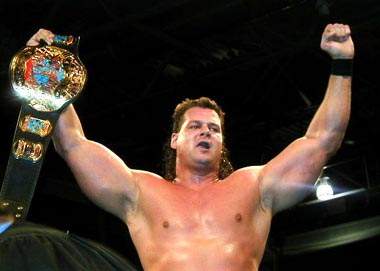 I just learned that former ECW champion, Mike Awesome, passed away on saturday. He was found hanging in him home from an apparent suicide by some friends of his that were coming to pick him up. Mike, whose real name was Mike Alfonso, was only 42 years old. My condolences go out to his friends and family. Awesome was probably best known for his work in ECW and his brutal matches with Masato Tanaka. Later when ECW folded, he had a run in WCW where under the retarded guidance of Vince Russo, Mike was given the stupid “that 70’s guy” gimmick that really hurt his career. He was picked up very briefly by WWE when they acquired WCW but was released shortly after. More recently I believe he worked in Japan and in 2005 he and Masato Tanaka once again stole the show at the ECW reunion PPV. I haven’t written anything about wrestling in awhile because the current product on all fronts has been pretty abysmal and it’s disheartening that the only time I’ve written about the business is to pass along the word that yet another wrestler has died too young. Rest in peace big man, I hope your in the ring up in the sky having some stellar matches with the others who have left this world too soon.