The return of the Bad Brains

I had heard recently that the Bad Brains were back together with HR and recording a new album with Adam Yauch at the helm. I had assumed it would be coming out on the Beastie Boys label, if that even still exists. Turns out I assumed wrong as I was sent the following information from Megaforce Records. 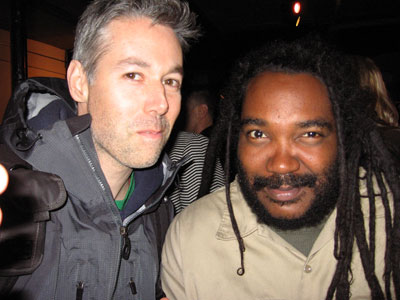 New York NY — March 2, 2007 — Megaforce Records is proud to announce it has entered into a worldwide deal with the legendary punk band Bad Brains. The new album is currently being finished in New York and will be released worldwide this spring 2007. Adam Yauch (MCA of the Beastie Boys) produced the yet-to-be-titled Bad Brains album and it represents the first recording, aside from Beastie Boys’ recordings, from the Oscilloscope laboratories and studio. The Bad Brains recently honored the legendary punk club CBGB’s closing in 2006 by performing three shows, which sold-out in record time.

“The Brains are one of most powerful and unique bands in the world. They have been a huge influence on me, and it was an honor to work with them on this record,” comments Adam Yauch.

Considered by some to be the “holy grail” of punk rock, the Bad Brains iconic legacy is best defined by their frenetic and legendary live shows. The Bad Brains are one of the definitive American punk groups who garner the same respect as the Sex Pistols, Black Flag, The Clash, and the Ramones. The band brought a new dimension to music by melding punk and reggae into an innovative style that has yet-to-be copied. And with this forthcoming release, the band essentially returns to their early roots with a raw, analog-driven chaos.

“It’s such an honor to be working with such an iconic and pioneering band. They are one of the most important and influential bands still working today. And with Adam Yauch producing, it is history in the making,” comments co-owner of Megaforce, Robert John. “Adam and Darryl were essential in getting all the original members (HR, Darryl Jenifer, Dr. Know, Earl Hudson) into the studio in NYC to create this magical album. It’s organic and powerful.”

A Bad Brains worldwide tour will commence, including several festival appearances, this spring in conjunction with the album’s release.

Hopefully it will be a much better album than the last time these guys got together and recorded that album for Madonna’s label.