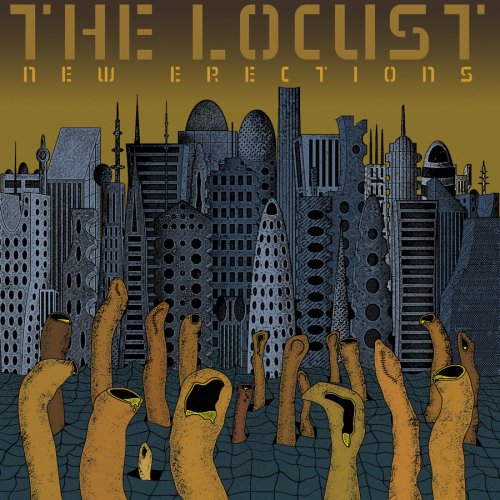 The Locust to me are one of the most interesting newer bands around these days. Instead of following the latest trend of hardcore and punk, they went out and forged their own sound which has since been copied by quite a few bands, none of which can do it as good as these aliens. Dressed up in crazy insect from outer space gear, The Locust played hyper fast hardcore with precision start and stop action peppered with all kinds of electronic noodling and sounds.

It is a good gimmick but one that could easily get stale after a few records. Luckily the band realizes this and their sound lately has evolved. Gone are the 50 second blasts of electro-thrash, they have now been replaced with songs that clock it at two minutes or more and are much more complex. A song could start out sounding like The Locust we all know and love, but it isn’t long before the song will progress and shift tempos completely and go from raging thrash to plodding doom. The changes don’t feel forced either, it all seems to make sense throughout the course of the song. They change it up so much I actually found myself wishing they left in at least a few songs that used the old formula just because it is such a departure from the last album, but I’d much rather be completely surprised rather than bored and this album in no way bored me. After a few listens to properly digest it I found myself appreciating their bravery in forging ahead in a new direction instead of sticking with what worked to the point of redundancy. Having seen the band recently I can tell you the new stuff sounds really good live too.

For you record collectors out there, they did release this on a limited edition colored vinyl LP as well that is available via mailorder or from the band themselves at their shows.

The Locust on myspace

Three One G records (for the vinyl)