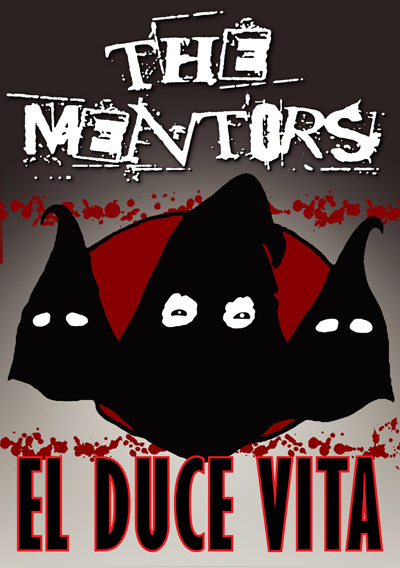 The Mentors started in the very early 1980s and were a three-piece rock band who were a bunch of perverts wearing black executioner hoods. Their songs were raunchy and offensive to those without a sense of humor. They got their start releasing a now-legendary EP on Mystic Records, followed by a live LP before going even more in a metal direction and leaving for perceived greener pastures on Death/Metal Blade Records, among other labels. The band lasted sometime into the 1990s before the tragic death of lead singer and drummer saw the end of The Mentors.

This DVD compiles music videos the band made for their post-Mystic releases. There is a total of 7 of them that make for a total run time of about 30 minutes. Watching them all in a row you’d think they were all made the same day as many of them look alike and they are certainly very low budget. They are also chock full of naked girls, El Duce’s penis, golden showers, El Duce eating out a girl on the rag, more naked girls, and the band playing. Think of it as a mix of porn and MTV and you know exactly what to expect. They must not have had the masters available for these videos because they look like they were taken from Nth generation VHS tapes complete with the occasional tracking glitches and the picture isn’t exactly sharp either. In between a couple of the videos is some interview footage of El Duce talking about the band.

As a bonus there is 45 minutes of live footage shot at three different venues. The footage is of bootleg tape quality with decent sound. Having only seen the band play once before El Duce died, it was a nice little bit of nostalgia for me as I was a fan of their early years, though the footage was all from around 1991 so the ratio of old to newer songs is heavily weighted in the new department. I’m sure there probably wasn’t a lot of people filming the band in the early 1980s so it doesn’t surprise me that there was no footage from that era included. What was a little disappointing however is that they didn’t include “The Mentors Fuck Movie” which was a little video they did during the Mystic years. Perhaps this footage was lost forever, I don’t know.

The Mentors were a band whose gimmick and joke did get stale as the years passed but their early records still hold up pretty well today. This DVD is really only recommended for the most die-hard of fans due to the sketchy video quality and the fact that it really only covers the band in what I viewed as their waning years, but at the very least it was nice to have some sort of visual document of the band so they won’t be forgotten.