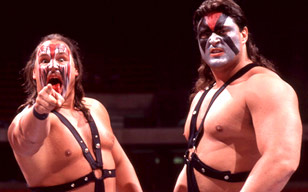 I guess since it has been a few weeks, someone up above (or down below depending on who you ask) decided it was time to take another wrestler from the world.

Brian Adams was found dead today. So far there has been no information as to the cause of death or any details.

Brian was probably best known as “Crush” who was the third member of Demolition, which was the WWF’s (now WWE) hugely successful Road Warriors knockoff. He also was known at one time as Kona Crush which I can’t recall happened before or after his stint in demolition.

At some point he left (or was let go, I don’t know) WWF and found himself a job in WCW where he was wrestling under his own name of Brian Adams. He was a fairly successful mid-carder and they teamed him up with Brian Clark (aka: Wrath) where they had a pretty good run in the tag team division before I think they eventually both were let go as WCW took its nose dive down the crapper.

Since WCW’s demise, I never heard what became of Brian Adams, perhaps he was working the indie circuits or maybe did some time in Japan where a big guy like him always seemed to be a bigger star even after their time in the limelight in the States faded away.

R.I.P. Crush, condolences go out to his family and friends for their loss.