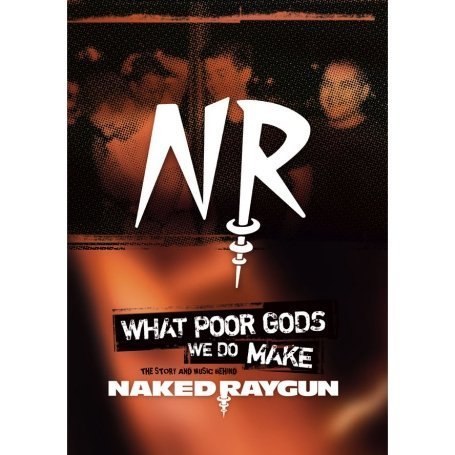 Naked Raygun were one of the earliest of the Chicago punk bands. In this city they became legendary over the course of time. What started off as a pretty out-there band quickly settled into their own unique sound and rapidly made a name for themselves around here to the point that a Naked Raygun show was an event people talked about for a long time before and after. At a time when it was dangerous and frowned upon to be a punk rocker, this punk band somehow transcended all the barriers of various cliques and not only did punks attend their shows, but suddenly so did jocks, metal heads and just about any other kind of character you can think of. That was completely unheard of at the time and defied all logic. Word of mouth spread throughout the masses and their shows got bigger and bigger, and their crowds more diverse despite the fact they were a punk rock band at a time that punk was considered mostly inaccessible to mainstream society.

The band attained such a huge and loyal following around here that they really became super heroes. Even when their later records were not up to par with the earlier ones, the people still turned out in droves, and they still ate up those records. The band could really do no wrong in people’s eyes. It was unlike anything I have seen before or since. Their early records were a huge soundtrack to my teenage skater-punk years and their shows back then were among the best I’ve ever seen. When the band broke up, which was never announced – they just sort of vanished, people mourned the loss of their heroes. Chicago was never the same.

Somehow the band never caught on as big outside of IL for the simple fact of their lack of regular touring. People who bought their records loved them, but they never attained the super hero status that they did in their home town. Had they toured more, they would have won over the entire world with their amazing shows. However I think you’d be hard pressed to question anyone who has listened to Basement Screams, Throb Throb, and All Rise and not have them tell you that they are amazing, inspiriing, and seemingly timeless records.

Nearly a decade later after disbanding, the band reunited for a pair of sold-out reunion shows. The people went crazy. It meant a lot to a ton of people that they got the chance to either see Naked Raygun again, or for the younger folks it was a chance to see this band that they heard such legendary tales about in action and see what the fuss was about. When the band played those nights, they were better at those shows than they were the couple of times I saw them near the end of their career. That really says something that a band can do a reunion and not only not tarnish their legacy, but actually one-up themselves from where they left off (which admittedly near the end, the shows left a little to be desired compared to the earlier years).

Last year, the band reformed yet again to headline the Riot Fest. It was shocking to say the least and really seemed to come out of nowhere. There was a lot of excitement surrounding it and rightfully so. They had the good sense to film the pair of shows the band did last year and use that as the basis around a documentary telling the story of the band and that is where we come to this DVD. As luck would have it, those shows topped the reunion shows as far as performance goes (at least they did in my eyes and I was a lot harsher of a critic than most) which is just icing on the cake.

This documentary tells the complete history of Naked Raygun. It is told through the eyes of the current band members as well as from various people either who were part of the early punk scene at the time (Steve Albini and The Effigies, among others) or through various members of bands who were influenced by the band (Darryl of The Bollweevils, Jeff from Four Star Alarm, etc). They start off at the beginning of how the band formed and they go through all the trials and tribulations and lineup changes. They mention pretty much every person who did time in the band and why they were no longer with the band and in some cases, they really didn’t sugarcoat why someone left or was asked to leave. Being a big fan of the band, they even covered people who came and went that I never knew about!

During the various interviews they cut from the footage of the person speaking to photographs or some sort of footage that related to the story being told in the scene. After a few minutes or so of this a live clip is shown from one of the two shows last year. It is a pretty even mix between footage from the Subterranean pre-show and the Riot Fest show itself. The footage was pro-shot in widescreen on multiple cameras and cleanly edited. They did a stellar job too!

The pacing and editing of the documentary was really well done. There were only a couple instances where they just suddenly seemed to jump topics without warning or a proper segue. The one thing I would have liked to see however would have been interview footage with the people who left the band to hear their take on what happened in regards to their various departures. They talk about how Santiago left, John Haggerty left, etc. but you only get to hear it from the side of the current band members. It would have really put what is already a top-notch documentary over the top as far as quality goes had they done this. Major departures like John and Santiago however were at least told from more than one current band member so it at least helped paint a less biased picture than had it just been just Jeff Pezzati telling the story.

A couple of points were really driven home in this documentary; Naked Raygun were super heroes to a lot of people growing up in Chicago, and they made music that is timeless and influenced a whole lot of people. Bands this special are so rare in a lifetime and it was long past due that someone documented this so more people can learn of this. It was also fortunate for everyone that the band decided to finally give it another go or else you wouldn’t be reading this long-winded review.

The feature is and hour and forty-five minutes long. It is completely interesting from start to finish and I didn’t move from my spot on the couch the entire time and nothing could distract me during it. The pacing was excellent between interviews and music. When they show a live clip, it is the full song. The video is widescreen but it is letterbox, not anamorphic which I found to be a bit odd in this day and age of DVD authoring. The sound is straight stereo and sounds great both in the live performances and in the interview footage and the audio was mixed well so I didn’t have to keep my remote handy to adjust the volume up and down for the various segments, it was all consistent.

The package also comes with an audio CD of almost two dozen live songs from the same recordings used for the DVD. It sounds great, even better than the Free Shit live album they did on their first pair of reunion shows ten years ago. It’s a great document of those shows that I can now place in my car or iPod to listen to and bring back the memories of those two great shows.

For less than twenty bucks, What Poor Gods We Do Make is a sound investment and a really well done documentary on a very important band. It serves as both an education and also as an inspiration to pull out all those Naked Raygun albums you may have been neglecting for awhile, or maybe even to give another chance to a couple that may be better than you remember them being.

Naked Raygun headlines the first night of this year’s Riot Fest and it should not be missed.