With there being a vinyl resurgence of late, many labels have started going back and reissuing old material on the superior format, sometimes for the first time and sometimes for the first time on said format for many years. A new label subsidiary of Cleopatra Records called Anarchy Music was recently started and are offering up a whole slew of very limited edition vinyl releases of some fairly well known punk bands. They are all being pressed in pretty small quantities and then tend to be a bit pricey considering the minimal packaging but they are still appealing to this long-time collector, especially since they’re releasing so many of my favorite bands material in these editions. They sent over a few of the releases that I’ll be featuring here over the next few days starting with this one. 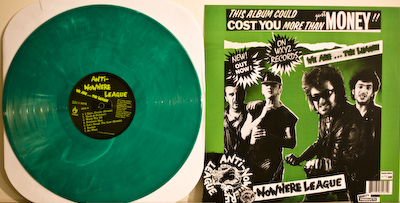 Anti Nowhere League – We Are the League limited edition LP

This is a limited edition reissue of the first Anti Nowhere League LP which just so happens to rank very high on my list of favorite punk records. This version actually contains two bonus tracks that were not on the original LP but were from a single (the songs “Rocker” and “So What” are the bonus tracks).

The record comes packaged in a clear poly bag and the cover consists solely of a single-sided 12×12 insert printed on cardstock. The record as you can see is on green vinyl and there was 300 pressed, each individually numbered. It also comes with an Anti Nowhere League patch and button.  The album artwork appears to perhaps be the original advertisement for the LP when it came out about 25 years ago now.

As a vinyl fiend myself, I was happy to add a new variation of a classic record to the vault, and in this case it was one with extra songs on it!

The usual vinyl stops should carry the Anarchy Music releases should you want one for yourself before they are gone. With only 300 made I’m sure they will go fast. A few places that carry them include: