Next in the series of Anarchy Music releases I received was a very limited LP by one of my favorite bands of all time, and the band I have more records of than any other in the entire vault. 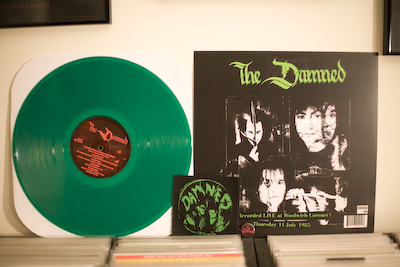 This is a live album from The Damned. It was recorded during the Phantasmagoria era and stands as one of the few live albums that I can recall from that era of the band’s lengthy career. The sound quality is a bit echoey but overall is pretty decent. It was really neat to hear live renditions of a lot of those songs since I didn’t go see them when they toured for that record due to lack of any sort of transportation.

Much like most of the releases on the label, this one comes packaged in a poly bag with a 12×12 single sided insert that serves as the cover. It is numbered out of 300 copies and is on green vinyl. It also contains a patch and a button that I was awfully tempted to take out and put on my jacket but I had to resist so I can keep my package complete. I noticed in my daily record perusing on the internet that this also comes on white vinyl. I am guessing that it is another run of 300 on the other color.

As a huge fan of The Damned, I always welcome another piece of vinyl to my ever growing collection of their records, especially one of such a limited nature.

The usual vinyl stops should carry the Anarchy Music releases should you want one for yourself before they are gone. With only 300 made I’m sure they will go fast. A few places that carry them include: