Saturday night I went over to Reggie’s Rock Room for the Naked Raygun DVD screening. The premise of the event was to show the Naked Raygun DVD that was just released and then the band would give a “festive performance” after it was over. I reviewed the DVD recently and was really a fan of it, so the opportunity to watch it again with a bunch of people at a nice club and actually get to see the band perform after was certainly very appealing. 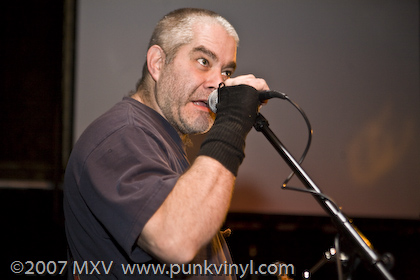 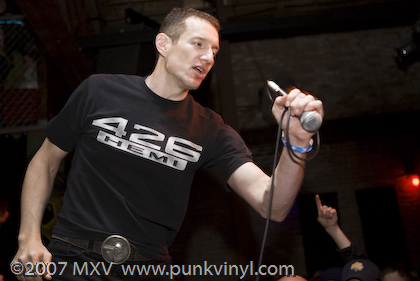 When I got there a small line had already formed outside of eager fans waiting to get their signed DVD (part of the admission package included a copy of the DVD signed by the band) and see the show. The doors opened and a pretty steady stream of people filed in and found spots to stand or sit to watch the DVD. An hour later and Riot Mike took the stage and said a few words to the crowd and the DVD began. 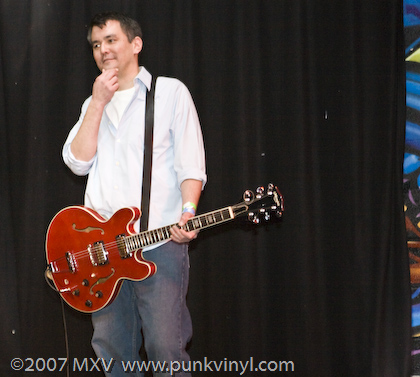 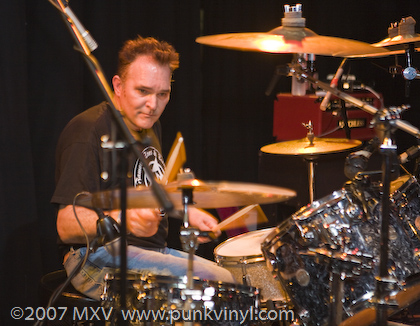 Watching the DVD again really made me want to see the band play and that feeling was shared by the entire crowd. When it was over the crowd loudly applauded and were eager to see the band play. A few minutes later Naked Raygun the stage and started playing. The crowd immediately started bouncing up and down and singing along in approval. 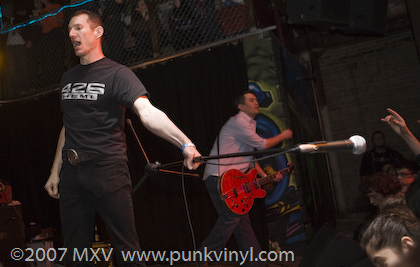 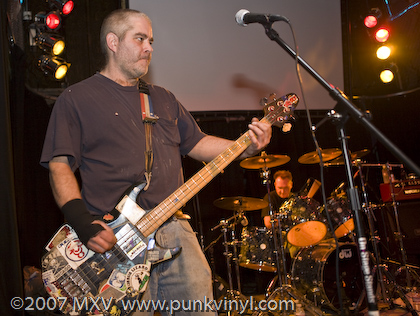 When the song was finished, Jeff announced that the band does not have a set list for the evening and that it was “danger request night”. The plan was the band would pick volunteers from the audience to request a song and the band would vote on whether or not they wanted to play it. If the band voted yes, they played it, if they voted no, then the person would have to accept some form of punishment. 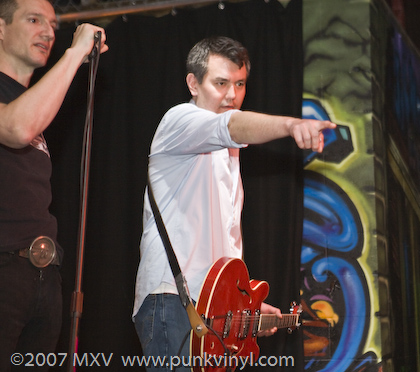 Picking someone for “danger request night” 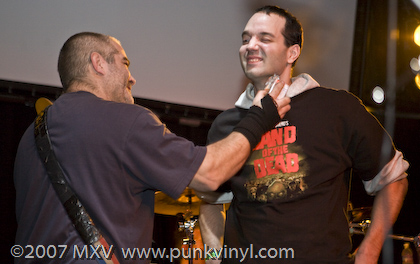 The first request, “Vanilla Blue” was accepted by the band and Jeff teased the person who requested it for playing it safe. They played a great rendition of it and then it was back to the requests. The first person to pick something that was shot down was brought up on stage and given a “Limburger necklace” where Pierre took a stick of Limburger cheese and wiped it all over the neck of the person, making them smell bad the rest of the night! 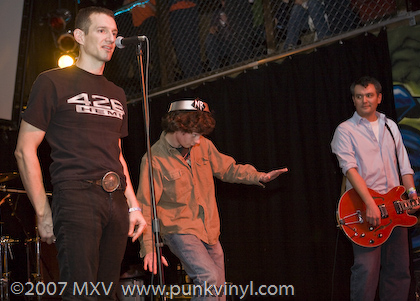 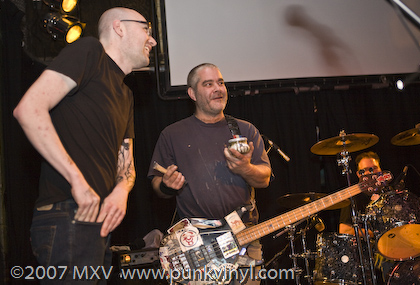 Hot Funk bribing his way out of punishment!

Everyone who choose poorly took their punishment with a smile on their face, except for Hot Funk who somehow bribed his way out of punishment! There were some oddball requests too and one person also requested “No Sex” which the band hadn’t played in like 20 years and they played it! The entire show was a lot of fun because it wasn’t just the band playing through a set list and then leaving, it had so much audience participation that it made everyone feel a part of the show. 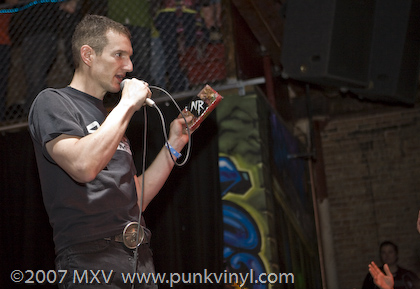 Dispensing of some “free shit” 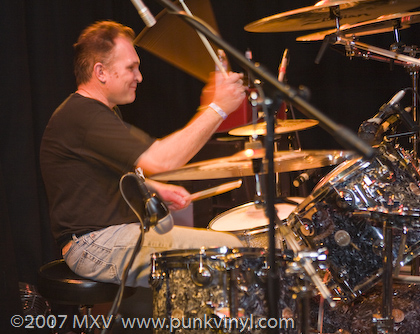 Eventually the crowd started chanting for “free shit”. This time out there was no custom made shit, but the band did throw out some bags of chocolates to the crowd. I was able to snag a piece that fell on stage and quickly gobbled it up since I was so hungry at that point that the chocolate served as my dinner. 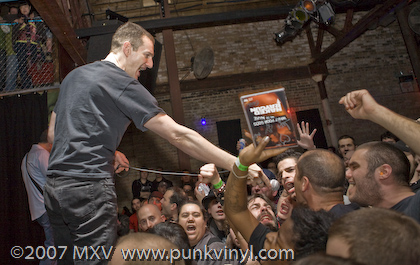 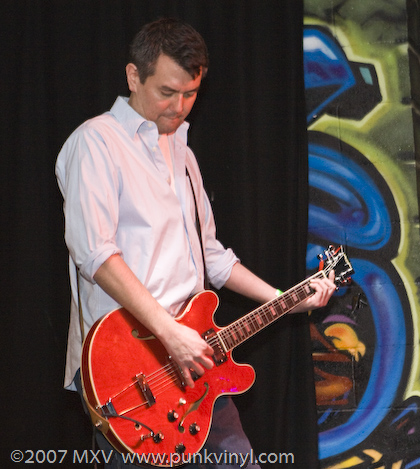 The band had only planned on playing a short set, however everyone was having so much fun, and the crowd kept wanting more that they ended up playing three encores and their total set time was about an hour and a half! The show went way longer than it was scheduled to go, much to the delight of everyone in attendance. 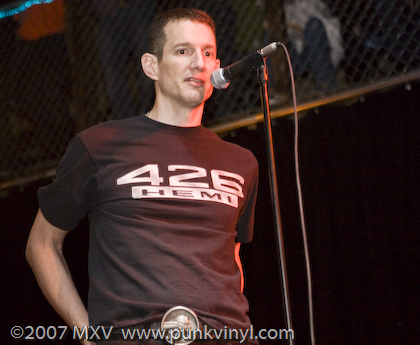 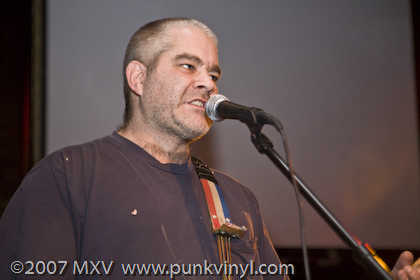 Of all the times I’ve seen Naked Raygun this year, this was easily the most fun due in part to the clever way they had the audience be part of the show. It was a great time and really felt like something special for the holidays. I went home with a big smile on my face reflecting back on just what an enjoyable show it was. 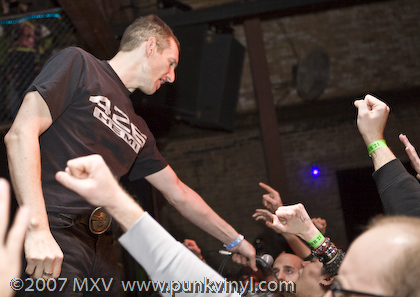 Additional photos from this show can be found on MXV’s Flickr Stream.