It has been reported that vinyl is once again become popular amongst music fans and has even been outselling CD’s in certain cases. Record collecting is becoming a lot more popular especially in the independent music world. It should come as no surprise that new record labels have started popping up, some of them putting out some really quality new releases and that is the subject of this feature on the label known as The Mylene Sheath who sent over their first three releases.

The bands on The Mylene Sheath so far have one thing in common; they are all instrumental bands. I’ve been really enjoying this style of music from such bands as Russian Circles, Red Sparowes, Pelican, and others. It seems that in the last couple of years this style of music has been growing and these bands are showing you can make interesting music without the need of vocals. 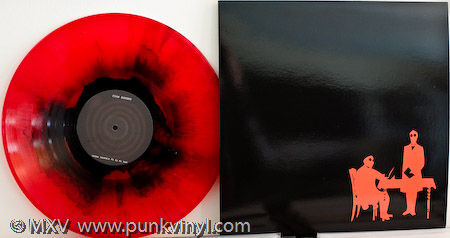 Of the three releases so far, this one is the most visually striking. The black and red cover is simple yet interesting and the choice of vinyl colors matches the cover nicely. Musically they are able to weave a variety of emotions into their songs without so much as a single syllable being spoken or shouted. Beware of Safety will take you on an emotional roller coaster throughout the coarse of a single song and set you gently back down on your feet at the conclusion. It feels like a lot of thought went into their song construction like a well-edited movie. “Weak Wrists” is the perfect example of how they do a slow build to a pretty big payoff only to slow it back down before slapping you with the other hand and going right back into another round. That song alone warrants the purchase price, and it’s even better that this record is a great listen from start to finish.

This is the longest release on the label as it is a double album. The music has a lot more ambiance to it than the other two releases and the songs seem to be longer overall. They seem more deliberate in their delivery and each song has a sort of signature feeling to it. When they are all quiet and mellow it’s good chill music to have on in the background, then one of the harder songs will come in and it will snap you back into reality and they prove they can pack a punch like any other. I really liked the mixed styles on this double album and again it is a great listen from the start of the first side all the way through to the end of the fourth. The record comes packaged in a really nice gatefold sleeve and also has an insert.

Check out Caspian on myspace to hear some of their music 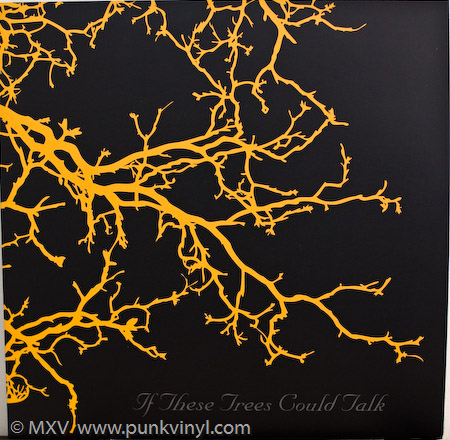 If These Trees Could Talk – LP

Of the three releases on The Mylene Sheath, the debut album from If These Trees Could Talk is hands-down my favorite. In fact I was so taken with this record I had a hard time prying it from my turntable to play the other releases on the label! The songs really seem to paint a very vivid picture and are atmospheric without being spacey. This record really feels like one big song split into six parts. The songs blend seamlessly into each other and it comes off sounding like a soundtrack to some place in your imagination that lasts for about 30 minutes. The song, “Signal Tree” is going to rank way high up on my list of best songs in the past five years and I don’t foresee this record leaving my turntable very often in the next few months. I think the cover art really fits the music quite well and I’m labeling this record as one of those that should be issued with every turntable, it is that damn good.

Now I’m on the quest to get both colors because this is easily my favorite record of the past year. Anyone out there have one to spare??

Check out the band’s myspace page.

The Mylene Sheath is run by a couple of the nicest people I think you’ll find in the record business and they obviously have a great ear and are big fans of the vinyl format. So far they are batting 1000 in their releases in both great music and great packaging and I hope they keep it up.

Check out The Mylene Sheath website and their myspace page.