The fine folks over at Nickel and Dime Records have released a couple of old Orange County punk albums on vinyl that is well worth noting. First and foremost they have released the second full-length album from punk legends D.I.. 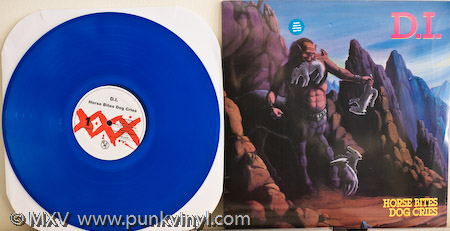 This was the band’s third record, and second full album. It is chock full of classic and catchy punk tunes such as “Pervert Nurse” and others. It is one of those punk albums (along with the band’s first EP, often referred to as Team Goon) that should be in everyone’s record collection. Now that this has been reissued, there’s no excuse for not having one!

Not only has this been reissued on vinyl, but this version contains a bonus track that was previously only available on the CD. There are two colors of vinyl available for this release; blue vinyl (pictured) and white vinyl. Both colors had 500 pressed.

Nickel and Dime Records releases should be available at most places that stock punk vinyl, or you can order direct from the label’s website. If you do, tell them MXV sent you!