If you are a record collector and an Isis fan your already expensive habit is likely doubly so thanks to their seemingly infinite reissues and variations of their records. If you are a completist their discography is enough to make you crazy and broke at the same time. Even if you are on top of the releases and buy them as they come out, the fancy packaging, colored vinyl and multiple discs means the things are pretty pricey a lot of the time. Thank you weak dollar!

It was 10 years ago that I went to see Neurosis play a show here in Chicago and some band called Isis opened up for them. I had never heard of them before until that night, but after their set I was so impressed with them that I went downstairs to their merch table and bought their new record, an 8 inch EP called The Red Sea. They had a few different colors of vinyl available and being the completist that I am (to a degree, I’m not nearly as bad with the newer records than I am with the old stuff), I picked them all up. It seems like yesterday but it has now been a decade since that purchase took place. Since then, not only has there been about 10 different pressings of this EP as the original 8 inch, but it was later reissued as a 12 inch on about as many different colors.

Now to celebrate its 10th anniversary, Second Nature Recordings, a label infamous for pressing each of their releases on an almost insulting amount of various colors all at the same time, has made a special edition of The Red Sea 12″. It wasn’t enough to just do one special edition, oh no. They did four!

The Red Sea – Clear with White and Red streaks – 100 made 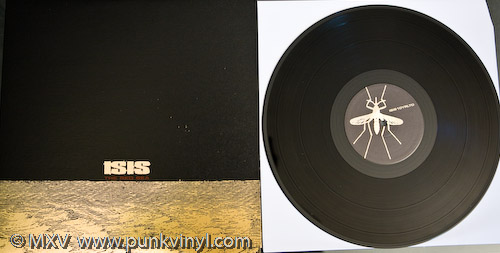 Aside from the fancy colored vinyl (some of which look really cool) or 180gm vinyl, the covers are gold foil printed with embossing. The print job on the covers alone had to be pretty pricey, along with the gold foil ink on the record labels themselves. They all come with a big insert too with similar printing containing the lyrics and liner notes.

All the deluxe packaging and special vinyl comes at a price though, they cost $25 each, making them perhaps one of the most expensive new release/in-print 12″ EPs ever released.  Of course knowing how rabid Isis fans are about their records, it’s probably half of what they’ll be selling for on eBay by Xmas.

Want one for yourself (or all four?) – go visit Second Nature Recordings website as I’m pretty sure you can only get them direct from them.