The Middle Class is sometimes credited for putting out the first “hardcore” record with their legendary Out of Vogue EP. Whether that is true or not is irrevelant, what is important is they put out some amazing early punk records. In their short career, the band left us with only a pair of 7″ EPs, an appearance on the Tooth and Nail compilation (another legendary album) and a rather lackluster LP that saw the band changing their sound. Aside from a self-released CD that for the past few years you could only buy at the Atta’s resale shop in CA, the music of The Middle Class has been largely unavailable for the past quarter century!

Frontier Records, who has an amazing track record of late of reissuing old SoCal punk rock has once again hit one out of the park with this pair of Middle Class reissues.

The Middle Class – Out of Vogue 7″ EP reissue

Sometimes cited as the first hardcore EP, the band’s first release is reissued on its original format on blue vinyl no less. This features all the original artwork in a much sturdier sleeve than the original, plus of course the current label information. Now you can have a copy for a lot less than a mortgage payment in your very own Punk Vault and even put one in a jukebox (which I would in mine had it not recently broken). 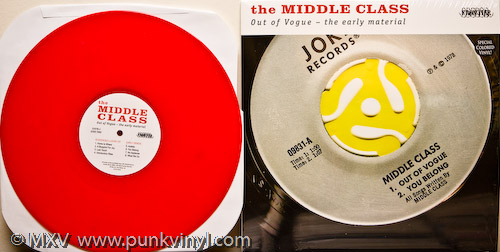 The Middle Class – Out of Vogue – The Early Material LP

This LP (which also comes on a CD for those of you who partake of such things) is the essential collection of The Middle Class. It has everything you really need from the band, which is everything except their album. All the songs from both EPs, plus the songs they recorded for Tooth and Nail (including one not included on that album!), and four early demo tracks. 15 tracks in all, and not a bad one in the bunch, making this a great listen from start to finish. The demo tracks sound quite good and the rest of the material sounds great as well. The LP comes on red vinyl and has an insert with some brief liner notes and some photos.

Both of these records are available direct from Frontier Records website, or could likely be found in your better record stores. I give these two reissues the highest possible recommendation as the music contained on them is essential.