The Accused – More Fun Than an Open Casket Funeral CD 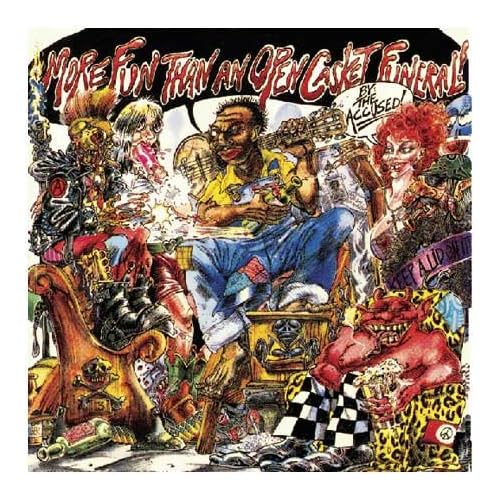 Back in the late 1980s punk rock fell on some dark times. All the great hardcore bands were either breaking up, trying to sound like U2 or turning metal, with turning metal being the avenue that was the most popular. While this was happening, new bands spawned that had this metalcore or crossover sound and some bands pulled it off with much success and others were just terrible. One of the bands who really  nailed it at that point in time was The Accused, they were among the cream of the crop in my opinion and this album I thought was probably where they peaked.

Originally released on the long defunct Combat Records (one of the biggest crossover/metal labels at the time) and having been out of print for probably 15 years easy, Unrest Records has given this album its long overdue reissue on a CD. The entire album is here sounding as good as ever, complete with lyrics and can finally be enjoyed by people for a normal price.

The album starts off with my favorite Accused tune, “Halo of Flies”, which starts off mid-tempo before exploding into a bit of a speed metal/hardcore song with Blaine’s trademark vocals that were often imitated but never duplicated. Other songs like “W.C.A.L.T.”, “Mechanized Death” and “Splatter Rock” show what a tight unit and how on top of their game The Accused was at the time of this record. It has probably been about 18 years since I’ve listened to this album in full, and having done so with this CD it reminded me how good this album and band really were. I should really dig deeper into the Vault more often!

Considering how normal metal influence is on hardcore these days it makes perfect sense that this album is finally back out there for the kids to hear where their current crop of bands got some of their sound from. Now all Unrest needs to do is press this up on vinyl!