Teenage Jesus and the Jerks – Beirut Slump/Shut Up and Bleed 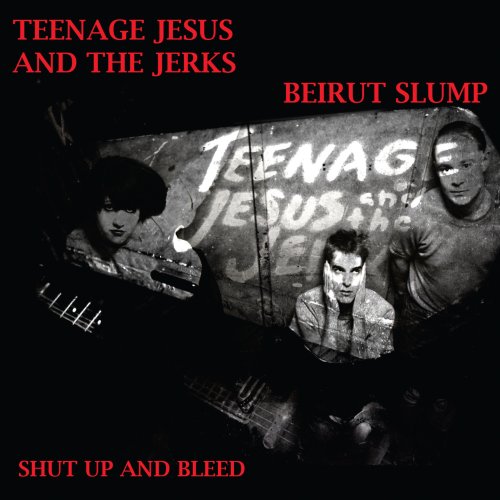 In punk rock’s infancy, one of the more interesting scenes going on was the No Wave scene happening in New York City. The No Wave compilation is one of those mandatory punk records that should be found in every record collection and Teenage Jesus and the Jerks was my favorite band from that scene.

Teenage Jesus and the Jerks was the brainchild of a young Lydia Lunch who from there would go on to a now three decade career in underground music, art, poetry, fiction, and film. It should come as no surprise such a prolific woman would be the instigator behind such a great and influential (whether those who were influenced by the band knows it or not) band. While the punk rock at the time was a lot more musical with the speed and volume turned up, Teenage Jesus and the Jerks went an entirely different and more unique and challenging direction. The music is very minimalist with clangy, angular guitars, simple percussion and Lydia’s unique voice driving the entire thing. The music will get under your skin, and the vocals will not let you divert your attention and will sometimes even give you goosebumps. Their first single, “Orphans” is the finest example of how the above ingredients made for such a great stew, but one that won’t please everyone. The band was challenging, and thirty years later the music is still not for the faint of heart, but it has aged wonderfully.

This CD collects everything Teenage Jesus and the Jerks recorded along with the Beirut Slump sessions, which was another project band Lydia Lunch had going on at the same time who only played three shows and recorded one record. Beirut Slump featured a different, male vocalist and was perhaps even more “out there” than Teenage Jesus. There is also some live material that has never been released before until now. The booklet contains some great photos and liner notes from Lydia Lunch and Adele Bertei and even contains a pretty detailed discography. There is a total of 29 tracks and the disc is about 50 minutes long, which is just long enough to really piss off your neighbors if you play this at loud volume with the windows open.

It has been a pretty good summer for Lydia Lunch fans with the release of a retrospective DVD and now with this excellent compilation of Teenage Jesus and the Jerks material. This CD is mandatory for anyone who considers themselves a fan of old punk rock or someone just looking for a history lesson on underground music. Now someone just needs to do a vinyl version of this collection!