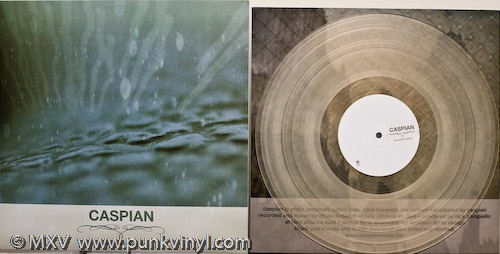 Caspian – You Are the Conductor

Awhile back I profiled some records released by The Mylene Sheath, which was a new label that put out a trio of great releases upon their launch. I was hoping that the label would continue and not just be a short-lived hobby and I was extremely happy to receive a package recently with a bunch of new releases, many from bands I’d never heard of before. It would appear the label is shifting into a higher gear as they have a bunch of stuff lined up as well! The first item in the batch of new released I received is from a band that has another record out on this label.

Caspian – You Are the Conductor 12″ EP
The Mylene Sheath

This is a reissue of Caspian’s first EP that came out in 2005 only on the inferior CD format. My first exposure to Caspian came at the hands of their 2xLP released by this very same label a year ago. Caspian are an all-instrumental band  that hail from MA. Unlike the riff-heavy and repetitive formula of a band like Pelican, Caspian opt for a more subtle approach. Their songs are very intricate with various textures of sound. They are really good at creating mood and atmosphere with their music and it is as if their record tells a story with just sounds and no words. Their 2xLP was a work of art and it is evident from now hearing this, their first release, that they were quite the artists from the get-go.

Those looking to get their feet wet and give the band a try would do well to pick this one up. Part of the reason I hadnt’ gotten around to writing about these latest releases sooner was I kept playing this one over and over at the expense of playing the rest of what was in the package! I’ve been listening to this record quite a bit since receiving it, which is a testament to its staying power.

The record comes in a standard sleeve with a really nice printed inner sleeve. The copy I received came on clear vinyl which I think really works well with the look of the packaging. It also comes on brown vinyl (available from the label), baby blue or white vinyl (available only through the bands).