Rosemary’s Babies – Talking to the Dead 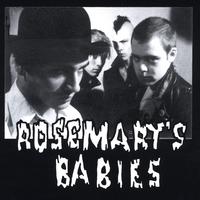 Rosemary’s Babies were a very short-lived New Jersey hardcore punk band who were around between 1981-1983. Their sole muscial output consisted of the Blood Lust 7″ EP which came out the year they disbanded. Those of you who are Samhain and Danzig fans will be interested to know that this was the band Eerie Von was in prior to joining Samhain. In fact they credit Eerie’s departure for Samhain as the reason Rosemary’s Babies disbanded.

Now a couple of decades later the music of Rosemary’s Babies has finally available to those of you without trust funds to spend on old punk records on ebay. The original EP along with tons of unreleased material is convienetly available on this CD. This CD actually came out a few years ago, however I think they have again reissued it or something through some arrangement with MVD.

The music is pretty standard fare hardcore punk for its time, the songs are short, fast, angry,and loud. I’ve owned the original EP for over twenty years now and a couple songs from it would always end up on mix tapes I used to make for my car or for people. This CD contains 25 tracks, 20 of which are studio recordings with the remaning songs being live from CBGB’s in 1983. The studio tracks were all remastered and it pains me to say it but they sound infinitely better than the original vinyl (which had a rather muddy sound to it). I don’t know if they remixed it as well but it sounds better than ever. While the disc itself is great, the packaging was kind of a let-down. There were no lyrics or liner notes of any kind. The booklet simply contained a couple of photos and the band logo. I wish they’d taken some time to at least put a band history and the lyrics in the packaging. It seems like it was done very much on the cheap.

I’m always happy when some classic punk from the early days gets reissued so people can hear these great bands from the past. Anyone who is a fan of Eerie Von, Samhain, or Danzig would do well to pick this up for it’s part in history, so should fans of early 1980’s hardcore so they can check out a band they probably missed out on.