My Dying Bride – For Lies I Sire 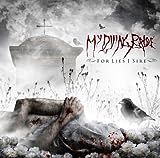 My Dying Bride – For Lies I Sire
Peaceville Records

It has been three years since the last My Dying Bride album was released. I was beginning to think the band had fizzled out but then this CD appeared in my mailbox one day. In the time between albums the band saw three new members join the fold (and I assume three also departed). It also marked the return of the band incorporating the violin in some of their songs, something that they used frequently in some of their earlier material but has been absent for quite some time.

My Dying Bride’s sound has been fairly consistent throughout the years. Ironically it was the one album where they tried a different direction that made me a fan of the band and that was their 1997 release, 34.788%… Complete. That album made me a fan and I sought out many of their other albums and soon heard what the “true” My Dying Bride formula was, and I liked that too, quite a bit actually.

The My Dying Bride formula is rather long songs that are somber, dark and melodic yet somehow still heavy. Their usually mid-tempo to slow pace allows the guitars to lay a bed of thick and heavy chords that help emphasize the gloomy mood of their songs. The vocals are very clear and also mostly melodic as well with the lyrics as clear as day. On top of the usual instruments, there is some non-traditional instruments for heavy music such as the violin. It all makes layers of gloomy and dark sounds that is really unlike anything else I’ve heard over the years. In fact it is rather amazing that the band has been around this long and yet there’s not a bunch of bands copying their sound (that I’m aware of anyway), but even if there was, My Dying Bride were the innovators of this style of somber gloom metal and ten albums later along with a number of lineup changes over years and For Lies I Sire easily stands up as being every bit as good as anything from the previous nine albums. Any fan of the band is going to find familiar territory on this album, territory they’ve come to know and love and they’ll welcome it with open arms.

Three years was a long time to wait for some new material from My Dying Bride but it ended up being worth the wait because For Lies I Sire is a great listen from start to finish, and well worth picking up for long-time fans or the curious onlookers wondering what the band is like.